Proposed Live Captures of Cetaceans, Seals and Penguins in Namibia

Proposed Live Captures of Cetaceans, Seals and Penguins in Namibia

In March 2016 a proposal to capture African penguins, marine mammals (cetaceans and pinnipeds) and sharks was submitted to the Namibian Ministry of Fisheries and Marine Resources (MFMR) by a partnership of two companies: “Welwitschia Aquatic and Wildlife Scientific Research Pty Ltd” and “Beijing Rare Animal Breeding & Promotion Co”. According to an article in the newspaper The Namibian, the proposed captures would include, annually, “…300 to 500 African penguins; five to 15 killer whales; 50 to 100 common bottlenose dolphins; 50 to 100 Indo-Pacific bottlenose dolphins; 500 to 1 000 Cape fur seals; and various sharks.”

Concern was raised in May 2016 when a Russia-registered ship named the Ryazanovka docked in Lüderitz before moving onto Walvis Bay. The Ryazanovka has been involved in the capture of killer whales in eastern Russia, most recently two killer whales captured in the Magadan region (northern Okhotsk Sea) in 2015. Chinese and Russian parks have been the principal buyers of killer whales captured in the Russian Far East in recent years. According to a recent report by the China Cetacean Alliance, as of October 2015, there were captive cetaceans in at least 36 parks in China, with others under construction. Demand for exotic marine exhibits is clearly high.  The vessel has apparently been sold to local buyers in Namibia (according to the Namibian newspaper Allgemeine Zeitung) and has since been at anchor in Walvis Bay, although a 9 December article suggests the vessel is bunkering and taking on other supplies. 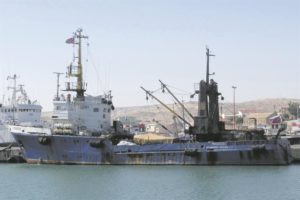 Namibian conservation groups commented on the proposal soon after it was received. Their concerns included the fact that African penguins are greatly threatened (Endangered on the IUCN Red List) and the scale of the proposed captures would, if successful, deplete, if not eradicate, local populations of bottlenose dolphins and killer whales in a very short period of time.  The most recent abundance estimate of coastal bottlenose dolphins in Namibia is ~100 animals. The proposal attempts to justify the capture of penguins and marine mammals by suggesting this would slow declines in fishery production, an unfounded and widely discredited assumption worldwide. Opposition to the proposal has also been prevalent in the Namibian press, and both national and international NGOs have submitted letters of objection to the MFMR.