It has been known for some time that fishermen have been killing freshwater dolphins in the Amazon and using them as bait for catfish (Mintzer et al. 2013; Iriarte & Marmontel 2013; Brum et al. 2015).  A recent report from Brazil found that following the decline of a regional delicacy, the catfish species called the ‘capaz’ (Pimelodus grosskopfii), fishermen started targeting a different catfish species, known in Brazil as ‘piracatinga’ and in Colombia as ‘mota’ (Calophysus macropterus), that is traditionally disliked by Brazilians because it is a scavenger (Cunha et al. 2015). DNA analysis by Cunha et al. revealed that this fish is being marketed under a variety of fictitious names including ‘douradinha’. River dolphin carcasses provide ideal bait for attracting large numbers of the carrion-feeding piracatinga. Indeed, the presence of dolphin tissue in piracatinga stomachs was confirmed by mtDNA control region sequencing (Cunha et al 2015). 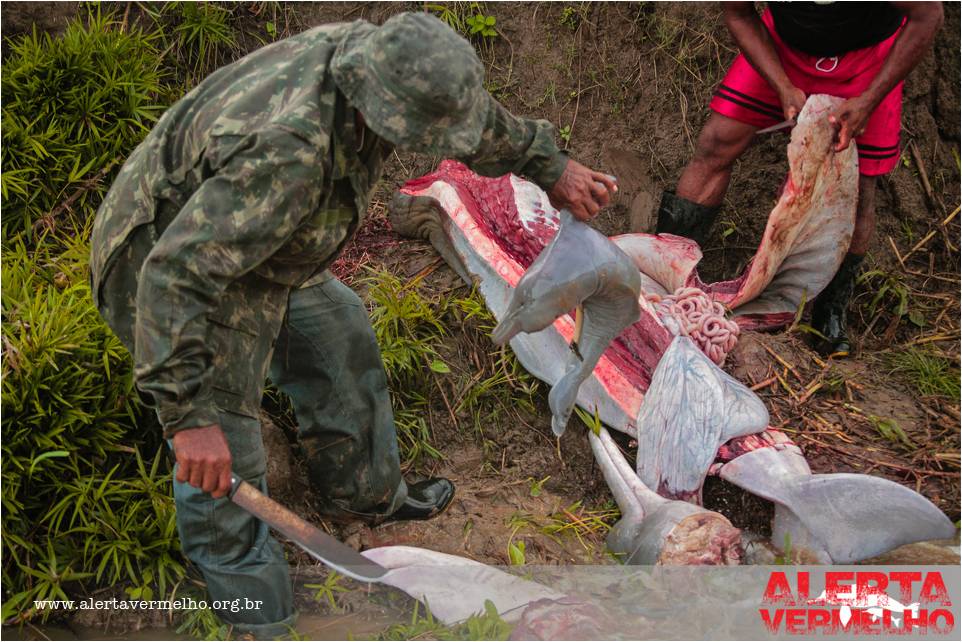 Foetus of an Amazon river dolphin being pulled from its mother as she is chopped up for catfish bait. Photo Credit: Alerta Vermelho (www.alertavermelho.org.br)

This use of dolphins as bait is directly linked to dramatic declines in dolphin populations in parts of the Amazon. A 5-year legal moratorium on fishing for piracatinga came into force in Brazil on 1 January 2016. Although the legal text justifying this temporary ban refers to implications for human health (piracatinga have high levels of mercury in their tissues), the trigger for passage of the act was public outrage over the killing of dolphins to supply bait. However, despite the ban, the trade in piracatinga in Brazil continues and therefore dolphins continue to be killed. Observations by scientists studying the dolphins in the central Amazon indicate that enforcement is weak and that the dolphins (and caimans) are still greatly threatened, at least in some large parts of their range.

Iriarte, V. and M. Marmontel. 2013. Insights on the use of dolphins (boto, Inia geoffrensis and tucuxi, Sotalia fluviatilis) for bait in the piracatinga (Calophysus macropterus) fishery in the western Brazilian Amazon. Journal of Cetacean Research and Management 13(2):163-173.