Endemic to Central and West Africa, the Atlantic humpback dolphin (Sousa teuszii, from here on referred to as AHD) is one of the least understood of the dolphin species. Despite the dependence of AHD on nearshore habitats that bring them into close contact with human activities throughout the range, a lack of targeted field research has hampered the collection of information on all aspects of the species ecology, including a lack of data on their distribution, population size, ecology, behaviour, life history, threats and mortality. 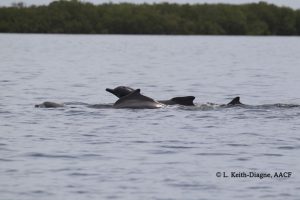 Caption: Atlantic humpback dolphins (Sousa teuszii) in the Saloum Delta, Senegal. Photographed during a July 2021 survey conducted in collaboration with the CCAHD.

The species’ range extends from Western Sahara in the north to Angola in the South, with presence confirmed in 13 of the 19 countries within that range (Weir and Collins, 2015; Collins et al., 2017). In many of these countries evidence is limited to a handful of historical, anecdotal, stranding or bycatch records, and where no records exist, it is unknown whether this reflects a true gap in distribution, or a lack of survey effort. Systematic surveys for AHD have been limited to Angola (Weir, 2009), Congo (Collins et al., 2014), Gabon (Collins et al., 2014; Minton et al., 2017), Cameroon (Ayissi et al., 2014), Senegal (Van Waerebeek et al., 2003; Weir, 2016), and Guinea ( Weir, 2015; Bamy et al., 2021). Most of these studies have been limited in time and scope, ranging from a few days to a few weeks. Based on this scant evidence, as well as a review of published estimates of abundance in each state, it has been estimated that fewer than 3,000 individuals remain throughout the species’ entire range of which half are likely to be breeding adults (Collins, 2015; Collins et al., 2017).

As with other coastal small cetaceans, bycatch in artisanal gillnets is thought to pose the most significant threat to AHD (Collins, 2015; Brownell Jr et al., 2019), while coastal development, habitat degradation, and directed hunts/aquatic bushmeat are also likely to play roles in population declines (Weir et al., 2021). These documented threats, low abundance, and likely declines led to an uplisting of the species from Vulnerable in 2012 (Reeves et al., 2012) to Critically Endangered in 2017 (Collins et al., 2017).

Dedicated conservation efforts for this species started in the late 1990s when the Convention on the Conservation of Migratory Species (CMS) supported the West African Cetacean (WAFCET) project (Van Waerebeek et al., 2000, 2003). Under this initiative, a number of range country scientists collaborated with international researchers to conduct beach, boat and interview surveys to establish a baseline of data on cetacean distribution and conservation status in the West Africa region, with collaborations continuing to the present day (e.g. Van Waerebeek et al., 2004; Segniagbeto et al., 2014; Van Waerebeek et al., 2017; Bamy et al., 2021). A CMS Concerted Action for the species was approved by the Conference of Parties in 2017, and the CMS is facilitating the drafting of a regional Conservation Action Plan, which will be presented to all range countries that are CMS signatories for their input and feedback in 2022.

Reports to the Scientific Committee of the International Whaling Commission have highlighted the conservation status of AHD from 2002 onward with increasingly urgent recommendations for research and threat mitigation (e.g. IWC, 2003, 2011, 2020; Collins et al., 2004; Van Waerebeek and Perrin, 2007; Weir et al., 2020).

The IUCN has also recognised AHD as one of the seven cetacean species most likely to follow the path of the Yangtze River dolphin (Turvey et al., 2007) and vaquita (Jaramillo-Legorreta et al., 2019) towards extinction unless urgent conservation action is taken (Taylor et al., 2020). As such, the AHD is one of the species of concern for the IUCN’s Integrated Conservation Planning for Cetaceans (ICPC) Initiative. 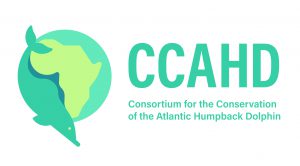 CSG members have collaborated with international and range country scientists and conservation organisations to form the Consortium for the Conservation of the Atlantic Humpback Dolphin (CCAHD). The CCAHD’s aim is to provide robust conservation advice on the AHD. The Consortium currently organizes its work through a Steering Committee and working group

s. These were established to evaluate and prioritize the actions needed to implement conservation projects on the ground, and to create the resources and capacity needed for local stakeholders to engage in research, monitoring, awareness-raising, and conservation planning. The systematic prioritization of conservation actions identified by these working groups can be found in this report.

In addition to fundraising efforts and expanding the resources available on the CCAHD’s trilingual website projects currently underway through the CCAHD include an IUCN SSC EDGE-supported series of government stakeholder engagement meetings, and AHD surveys in the Saloum Delta in Senegal. Collaboration and support through the CCAHD has already yielded increased reporting and documentation of AHD in Congo and Nigeria, and it is hoped that continued collaboration will facilitate more systematic reporting and surveys throughout the species’ range. 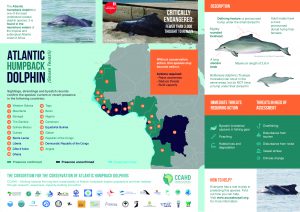 Caption: Infographic produced by The Consortium for the Conservation of Atlantic Humpback Dolphins (CCAHD). A trilingual website also provides information about the species throughout its range, and resources ranging from searchable literature lists to outreach and education materials that can downloaded. https://www.sousateuszii.org/

Further to these projects, the following priority actions have been identified, for which funding is urgently needed: 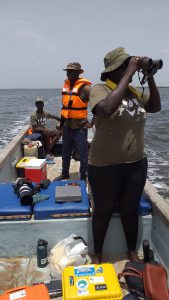 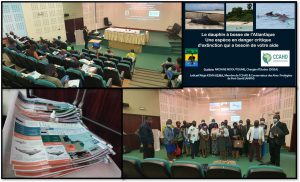 Caption: In June 2021, with support from an IUCN-SSC EDGE grant, government stakeholder engagement meetings were held in Gabon, Cameroon and Senegal to raise awareness of Sousa teuszii conservation needs and encourage adequate conservation planning for the species.

IWC. 2003. Report of the 54th meeting of the Scientific Committee of the International Whaling Commission – Annex K Small Cetacean Subcommittee. Journal of Cetacean Research and Management

IWC. 2011. Report of the 62nd meeting of the Scientific Committee of the International Whaling Commission – Annex L Small Cetacean Subcommittee. Journal of Cetacean Research and Management

Van Waerebeek, K., Ndiaye, E., Djiba, A. and Diallo, M., 2000. A survey of the conservation status of cetaceans in Senegal, the Gambia and Guinea-Bissau WAFCET-I Report. Convention on the Conservation of Migratory Species (CMS); UNEP.