Yet Another Threat to Taiwanese White Dolphins Is Imminent

Yet Another Threat to Taiwanese White Dolphins Is Imminent

On 13 February 2022, an article appeared on this website concerning the existential threat of net entanglement to Taiwan’s endemic humpback dolphin subspecies (Sousa chinensis taiwanensis; known locally as Taiwanese white dolphin). After nearly 15 years of this dolphin being IUCN red-listed as Critically Endangered (https://www.iucnredlist.org/species/133710/122515524#amendment) and five years of its being listed as Endangered under the U.S. Endangered Species Act, essentially nothing significant has been done by the Government of Taiwan to address entanglement, or any of the numerous other threats to this very small and declining population (thought to have numbered only about 60 individuals in 2017, the survey year for the most recent abundance estimate reported by Araújo-Wang et al. 2022).

It recently came to the CSG’s attention that a possibly final, decisive blow to the Taiwanese white dolphin’s survival is on the horizon. Taiwan’s parliament is apparently moving ahead with a proposed Taichung Outer Port Area Expansion Project, which would ‘reclaim’ (in other words, transform into an industrial moonscape) another large portion of nearshore marine and estuarine habitat in the heart of the dolphins’ distribution.

John Wang, the world’s leading expert on Taiwanese white dolphin’s and recipient of the international Society for Marine Mammalogy’s 2021 Conservation Merit Prize (https://marinemammalscience.org/funding-and-awards/dr-john-wang-receives-the-2021-society-for-marine-mammalogys-conservation-merit-prize/), pointed out after analyzing extensive data on dolphin movements and ecology, that the proposed expansion of Taichung Port to enable construction and installation of a liquified natural gas (primarily methane, a powerful greenhouse gas) terminal would only exacerbate an already desperate situation. Wang’s report, prepared in 2018 at the request of the Wild At Heart Legal Defense Association (a local NGO concerned about the Taiwanese white dolphin’s dire state), concluded that for many sightings by his research group, the animals were moving quickly through waters fronting Taichung Port, which had already been artificially deepened by dredging and made much deeper than the shallow waters preferred by humpback dolphins. Expansion of the harbour would force the animals into even deeper waters as they attempt to travel to and from their priority habitat north and south of Taichung Port (something that very nearly 100% of the dolphins do). This would not only disrupt movements but also likely stop some individuals from even trying to cross these waters. The truth is that for successful conservation of Taiwanese white dolphin’s over the long term, there should be no port expansion. Rather, the northern shore of the Dadu River Estuary, which is the dolphins’ most important remaining habitat, needs to be restored. This habitat was once a sprawling, highly productive littoral zone but that zone is now occupied by the concrete and tetrapod walls of the massive Taichung power plant (see photos). 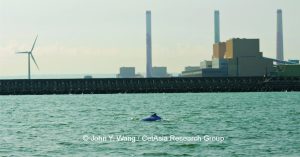 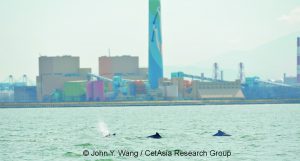 The outlook for the Taiwanese white dolphin is therefore increasingly bleak, and reminiscent of those we faced with the now-extinct Yangtze River dolphin (baiji) in China and are facing with the very nearly extinct vaquita in Mexico (see our most recent vaquita news here). The best available science forces us to conclude that:

It is also important to note in this present context that one of the main outcomes of the recent Convention on Biodiversity Conference of Parties (COP15) was a call for “maintaining, enhancing and restoring ecosystems, including halting species extinction and maintaining genetic diversity.”

More Information and other News Stories on the Taiwanese White Dolphin:

2017 – Initiative to save Taiwanese white dolphins from extinction