The net removal effort, started by Sea Shepherd’s Operation Milagro in collaboration with the Mexican Navy in 2015, is building to become the biggest yet in the totoaba season currently under way. The initial Sea Shepherd/Navy effort focused on observing pangas illegally setting nets at night and on removing those nets. The effort was expanded in 2016 to systematically remove both active and inactive nets throughout the vaquita’s primary distribution.  This expansion in effort has been led by the Department of the Environment (SEMARNAT) together with Sea Shepherd, the Mexican Navy and Army, PEMEX, WWF-Mexico, Museo de la Ballena, Parley, World Animal Protection, and the fishermen’s organizations PESCA ABC and Cooperativa Islas del Golfo. The Mexican Fisheries Department CONAPESCA recently started supporting the program as well.

From December, 2016, through February, 2018, SSCS has retrieved 394 nets, over 270 of which have been active totoaba nets. A total of 61 totoaba nets were retrieved in February 2018. This takes the total number of active nets removed by Sea Shepherd thus far in 2018 to 96. Over 50 tons of net were donated to Parley for recycling (further details can be found in the CIRVA 10 Report).With fewer than 30 vaquitas remaining and the idea of rescuing some by capturing them and placing them in human care not considered viable, conservation action is now focussed on enforcement and net removal. The current net removal effort during the totoaba spawning season will last until May. Because this effort is critical to saving the vaquita, progress will be updated on this website monthly.

Despite the enhanced net removal efforts and enforcement focus on areas of overlap between vaquita distribution and illegal fishing, the removal of active totoaba nets is apparently following the pattern of the last two years, which has resulted in the dramatic decline in vaquitas. To give the best idea of the relative risk of entanglement for vaquitas, only efforts by Sea Shepherd in the past 2 years are shown. Even then direct comparison of the numbers of nets removed by Sea Shepherd efforts in February 2017 and 2018 is not a perfect indicator of the risk presented to vaquitas because net removal has become more efficient both due to experience and increased efficiency resulting from the addition of using side-scan sonar to locate nets. However, the data in the table and figure below clearly indicate that illegal fishing persists and follows the earlier pattern of increasing as the totoaba spawning season progresses. So far, there is no indication that enhanced enforcement is being effective. 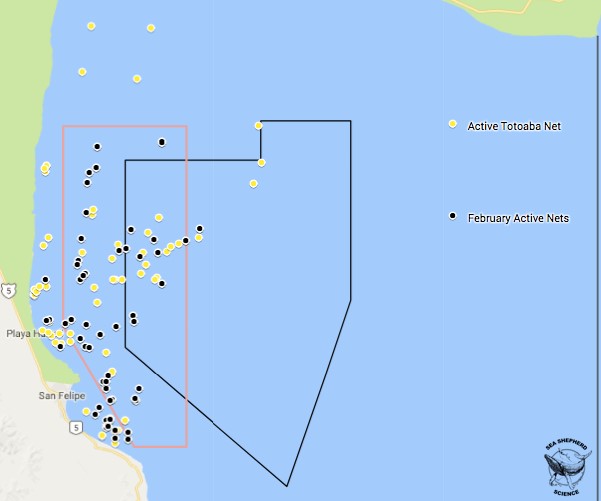 The map shows active nets removed from December 2017-February 2018. The yellow dots are active totoaba nets removed prior to February and the black dots those removed during February only. The black line denotes the vaquita refuge and the orange line the enhanced enforcement area. 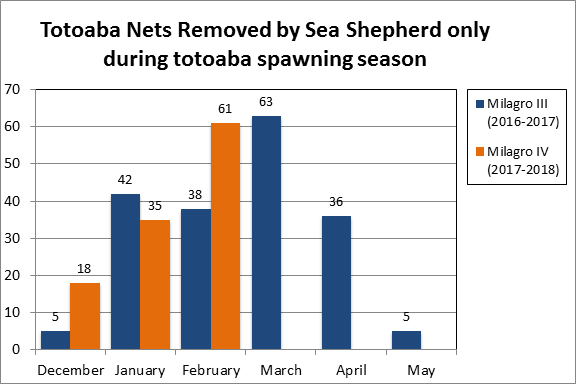 The bar graph shows the number of totoaba nets removed by Sea Shepherd during totoaba spawning season for the Milagro III operation (blue) and through February for Milagro IV (orange).