Although efforts to remove lethal gillnets from the vaquita’s habitat will continue, the totoaba spawning season is now past.  With fewer than 30 vaquitas remaining and the idea of rescuing some by capturing them and placing them in a protected enclosure not considered viable at this stage, conservation action is now focused on enforcement of the gillnet ban and net removal. May saw a dramatic drop in the number of nets retrieved.  The Farley Mowat finished operations and effectively concluded this year’s operations on 4 June. No active totoaba nets were removed in June. During the 2017/2018 totoaba spawning season as a whole (December through May), 400 active totoaba nets were removed by 4 different vessels representing 77,900 m of net. One dead vaquita was found that had died of gillnet entanglement (see March Report for necropsy results).  A video summary film of the season has been released by the Sea Shepherd Conservation Society here. 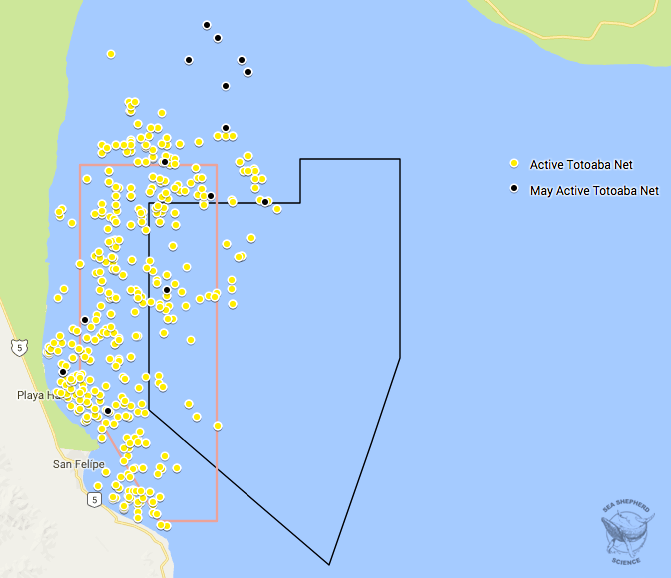 The map (Source: Sea Shepherd Conservation Society Internal Reports) shows active nets removed from December 2017-June 4, 2018 by all net removal operations. The yellow dots are active totoaba nets removed prior to May and the black dots those removed during May only. The black line denotes the Vaquita Refuge and the orange line the enhanced enforcement area.

The data clearly show that illegal fishing remains at a very high level in areas known to have contained vaquitas last fall.  A huge “thank you” goes out to all participants in this effort: the Department of the Environment (SEMARNAT), Sea Shepherd’s Operation Milagro, Museo de la Ballena, the Mexican Navy and Army, PEMEX, WWF-Mexico, Parley for the Oceans, PRONATURA, World Animal Protection, and the fishermen’s organizations PESCA ABC and Cooperativa Islas del Golfo. The Mexican Fisheries Department CONAPESCA recently started supporting the program as well.

Acoustic monitoring will begin in a few weeks and last through mid-August.  This monthly reporting on the CSG website will be suspended for now.