From 12-16 March 2018, the IUCN Marine Mammal Protected Areas Task Force (the “Task Force”) conducted the third Important Marine Mammal Area (IMMA) workshop, this one in Kota Kinabalu, Sabah, Malaysia, on the island of Borneo. Covering the North East Indian Ocean and South East Asian Seas Region, this workshop follows IMMA workshops in the Mediterranean and in the Pacific Islands in 2016-2017.

The workshop generated the biggest numbers so far; a total of 46 candidate IMMAs. 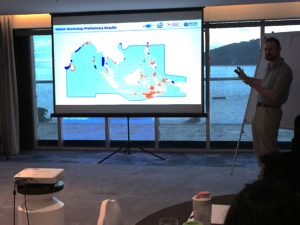 IMMA Co-ordinator Michael J. Tetley led the 34 marine mammal experts and observers from 17 countries as they worked through more than 100 areas of interest (AoI) submitted for consideration by workshop participants and others. From these preliminary AoI, the group merged 33 areas, deferred 11 others, kept 24 as AoI, and then prepared concise profiles for the 46 candidate IMMAs, proposing boundaries and explaining how each one met the IMMA criteria.

The 46 cIMMAs will now go for peer review before being put on the IMMA e-Atlas as official designations. If they don’t pass peer review, they’ll revert to AoI and will be considered again in the future.

The materials for AoI and cIMMA identification included maps of MPAs and other conservation designations in the region as well as IUCN key biodiversity areas (KBAs) and ecologically or biologically significant areas (EBSAs) as defined under the Convention on Biological Diversity. Additional data layers depicted bottom topography with features such as seamounts and continental drop offs, ocean currents and surface productivity. 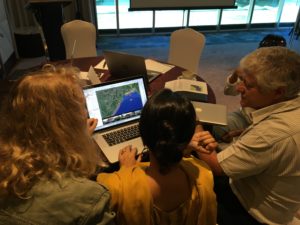 Participants of the IMMA workshop defining the boundaries of Areas of Interest. Photo credit: Erich Hoyt

The third IMMA workshop region stretched from the coast of India, Bangladesh, Thailand and Vietnam in the North to the vast Indonesian archipelago in the south. The experts identified sites for marine mammal species such as Indo-Pacific humpback and Irrawaddy dolphins, finless porpoises, Bryde’s and Omura’s whales as well as blue and humpback whales, and dugongs. The region includes the Coral Triangle, one of the most species-rich areas in the ocean, both for marine mammals and overall marine biodiversity.

The preliminary results from the workshop were announced as part of Task Force presentations at the European Cetacean Society annual meetings in La Spezia, Italy, 6-10 April 2018. Final results are expected to be posted online in September 2018.

For more information and contact details for the IUCN Marine Mammal Protected Areas Task Force and the IMMA work, go to www.marinemammalhabitat.org.