There are four (maybe more) separate species of Sousa

There are four (maybe more) separate species of Sousa

Dolphins in the genus Sousa, the humpback dolphins, occur in coastal waters of West Africa, around the Indian Ocean, and in SE Asia and Australia. A recent scientific paper starts to clarify the number of species in the genus. Martin Mendez and Howard Rosenbaum from the Wildlife Conservation Society and American Museum of Natural History pulled together a large team of collaborators from across the taxon’s range. Together, they amassed 235 genetic and 180 morphological samples for new analyses. Previous genetic work, particularly that led by Cèline Frère, suggested that Sousa in Australian waters are distinct from those elsewhere. Earlier morphometric work by Tom Jefferson and Koen Van Waerebeek had not found differences among samples across the Indo-Pacific, suggesting caution when dividing the “Indo-Pacific” clade of Sousa into separate taxa. Mendez and coauthors’ new paper reanalyzed the morphometric data and detected differences, supporting the concept of at least four separate species: S. teuszii in West Africa, S. plumbea in the central and western Indian Ocean, S chinensis in the eastern Indian and western Pacific oceans, and an as yet unnamed Australian species. 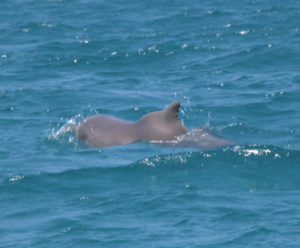 There’s further evidence suggesting two distinct groups (south-east Africa and the Arabian Peninsula) in the western portions of the range of S. plumbea, and the status of dolphins between south-east Asia and the Indian subcontinent probably won’t be resolved without more sampling. The “Australian” species (which lacks the dorsal “hump” characteristic of S. plumbea and S. teuszii) probably also occurs around the island of New Guinea although establishing the limits of its range will require further sampling in Indonesia, Malaysia and Papua New Guinea. Mendez’s previous work demonstrating links between oceanography and genetic distinctiveness in Sousa suggests ways forward.

What does this mean for Sousa conservation? S. chinensis, S. plumbea and the Australian species tend to occur in small, relatively isolated populations. Sousa generally tend to live close to shore in areas that are either already heavily affected by human activities or that are becoming more so.  Their restricted coastal distribution, susceptibility to bycatch, and proximity to various human activities make them extremely vulnerable, and all Sousa populations are of conservation concern.