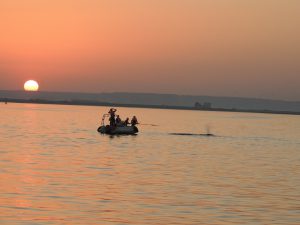 On the evening of January 18th, 2021, staff at the Environment Authority – Oman (EA) were notified that  an Endangered Arabian Sea humpback whale was entangled in fishing gear inside the Port of Duqm. The whale apparently had been trapped for days, with net and line wrapped inside its mouth and around the flippers, dorsal fin and tail stock. This situation was immediately recognised as a significant risk for both the whale and Port operations.

Recalling the entanglement response training that had been conducted by the International Whaling Commission (IWC) in Oman in 2015, specialists from the Environment Authority, Five Oceans Environmental Services LLC (FOES) and Future Seas Global SPC, supported by the Environment Society (ESO) and the Port of Duqm, quickly mobilised a team and equipment to travel from Muscat to Duqm, reaching the Port on the following day.  With assistance and personnel from Oman’s Coast Guard, Royal Air Force of Oman (RAFO) and the Port of Duqm, as well as real-time advice from members of the IWC disentanglement expert panel, the team spent the afternoon of the 19th initiating disentanglement.

Click here to watch a video clip of the response.  This shows the team in the day’s last light, attaching buoys to slow the whale down and the prevent it from diving while the team was working to remove the net. During this intervention, the team noted that as the whale attempted to dive, the upwards force of the buoy helped to unwrap rope and net from the mouth, followed by more rope being dislodged from the flippers and area around the dorsal fin. By the end of the day it was apparent that the only net remaining was on the tail stock.

Video and photographs of the whale during the disentanglement allowed the research team to recognise it as one of the individual whales catalogued in a long-term photoidentification study that has been undertaken in Oman since the year 2000. The whale was identified as individual ‘OM11-016’, which was first photographed near the Port of Duqm in 2010, and then again further south near Hasik in 2011 and 2014.  Most recently this whale had been observed again just outside Duqm Port in October 2020.

On January 20th, when the rescue team returned to the scene to continue the disentanglement, the whale was no longer in the port. Neither a search of the immediate area using port pilot vessels nor a helicopter search by the Royal Air Force of Oman detected the whale. However, video shared by a coastguard vessel showed a whale swimming freely in the port later on the day of the 20th. Although the video footage did not allow for definitive identification, the habitual appearance of this whale in the port over the last 3 months, the absence of detections during the aerial search, and the observations of the net unwrapping on the previous day all led the team to conclude that this was likely the same whale, and that the actions taken on the 19th had enabled the animal to shed the rest of the gear and swim free.

With fewer than 100 individual humpback whales believed to remain off the coast of Oman, the incident highlights a number of issues of critical importance to efforts to protect the regional humpback population and prevent its extinction:

A photo shared on social media of a fisherman from an Iranian vessel operating off the coast of Somalia, attempting an extremely dangerous rescue of a female humpback whale as a calf swims nearby.