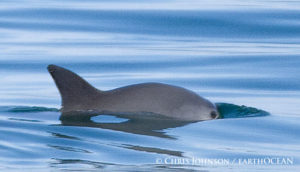 Only about 60 vaquitas remain in the Gulf of California, according to a report presented this week to Mexico’s Minister of the Environment and Natural Resources and the governor of Baja California. This represents a decline of more than 92% since 1997. Unless Mexico extends the gillnet ban and enhances its strong commitment to combat illegal fishing, this small and critically endangered porpoise will be driven to extinction within five years, according to an international team of scientists established by the government of Mexico (the International Committee for the Recovery of the Vaquita, CIRVA) who met this week in Ensenada, B.C., Mexico. 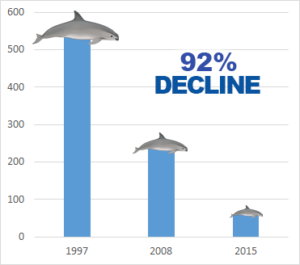 A range-wide survey late last year confirmed earlier results from acoustic monitoring showing a catastrophic decline of vaquitas amid a resurgence of illegal gillnetting for an endangered fish, the totoaba (Totoaba macdonaldi).  Swim bladders from these fish enter the illegal wildlife trade in China, selling for thousands of dollars per kilo.

“We are watching this precious native species disappear before our eyes,” said Lorenzo Rojas-Bracho, chair of CIRVA and co-chief scientist of the survey. “Our latest survey confirms the catastrophic decline before the emergency gillnet ban. This gillnet ban and strong enforcement must continue if we are to have any hope of saving the vaquita.”

CIRVA praised the unprecedented conservation actions already taken to stop the impact of both illegal totoaba fishing and legal gillnetting by the government of Mexico.  The President imposed an emergency two-year ban on gillnets throughout the range of the vaquita in the northern Gulf of California beginning in May 2015. The Mexican Navy oversees enforcement and local fishing communities are receiving millions of dollars of compensation for lost income. However, CIRVA stresses that the ban must become permanent if the species is to survive and recover. 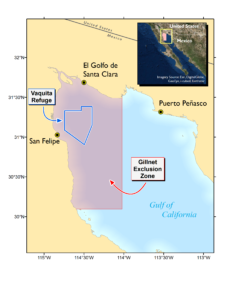 Rafael Pacchiano, Mexico’s Secretary of the Environment and Natural Resources, stated that federal authorities are working in a coordinated and committed manner to prevent illegal fishing of totoaba in the area that is safeguarded for vaquitas. They are also combating the illegal trafficking of protected marine species and the presence of organized criminal groups related to this activity.

“Surveillance operations were intensified, especially at night, by incorporating equipment and personnel from the Agency of Environmental Protection (PROFEPA), the Navy of Mexico, the Federal Police and the Department of Fisheries, allowing greater land and maritime surveillance during the curvina fishing season in April,” Secretary Pacchiano said.

Despite the ban, three dead vaquitas were found in March, all having died from entanglement in gillnets probably set for totoaba. Forty-two illegal nets were removed over the past four months by the enforcement team of the Navy and Sea Shepherd’s Operation Milagro.  “The lure of big money for totoaba swim bladders killed at least three more vaquitas, individuals sorely needed to prevent the species’ slide toward extinction,” said Frances Gulland of the Marine Mammal Center in Sausalito, California, who performed necropsies on two of the carcasses.

If the current ‘emergency’ gillnet ban is made permanent and, importantly, more effectively enforced, the vaquita may recover. Protection of two other Mexican marine mammal species that were at very low levels has led to recovery. “While there is good reason to expect that vaquitas could recover if deaths in gillnets were stopped.” says Barbara Taylor, co-chief scientist of the survey and a member of the recovery team, “if gillnetting is allowed to resume in the northern Gulf, the vaquita may be extinct by 2022.” Given the dire situation, CIRVA recognizes that every option must be investigated and a plan to examine the feasibility of live capture and a temporary safe haven is in place – but there is no guarantee of success. CIRVA emphasizes that this is not an alternative to a permanent enforced ban on the gillnets that kill vaquitas.

Since vaquitas are accidental casualties of gillnetting, fishing methods and markets must change to protect them. Gillnets also kill hundreds of thousands of porpoises, whales, dolphins and seals worldwide every year.  “If Mexico managed to solve this problem of vaquita mortality in gillnets, it would set an example for other nations, showing that fishermen can fish sustainably and co-exist with porpoises, dolphins, and other sea mammals,” says Taylor. 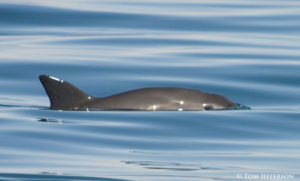