For the first time, scientists working in the waters of Patagonia are using satellite tags to track southern right whales from their breeding and calving grounds in the sheltered bays of Península Valdés, Argentina, to unknown feeding grounds in the western South Atlantic. It is hoped that this will provide clues to the cause of one of the largest die-offs of large whales ever recorded.

Southern right whales have rebounded from centuries of commercial whaling; populations have grown by as much as seven percent annually since 1970. Around one third of all southern hemisphere right whales alive today use the protected bays of Península Valdés as calving and nursing habitat between the months of June and December. However, at least 672 southern right whales have died at Península Valdés in the last ten years, the vast majority young calves. A number of explanations have been proposed: nutritional stress due to krill depletion, bacterial biotoxins in nursery waters, infectious disease and gull harassment. So far there has not been enough evidence to confirm that one or a combination of these factors is to blame. In the process of trying to understand the causes of the die-off, scientists have successfully attached satellite transmitters to five whales: three young, solitary males and two adult females with calves. In addition to transmitting geographical positions, two of the tags are equipped to monitor dive profiles and the temperature of the whales’ preferred habitat. All of this information will be used to help determine the location and condition of feeding grounds as well as the migratory routes taken to reach them.

It has been several weeks since the tags were attached and transmissions began. The three young males have left the nursery waters of Península Valdés. They have covered the wide ocean shelf, reached the shelf break over 200 miles offshore, and are now heading in a south-easterly direction, crossing deep, open-ocean water towards Antarctica. The adult females remain close to the Argentina coast, apparently waiting until their calves are strong enough to complete the long migration (see map of recorded movements). 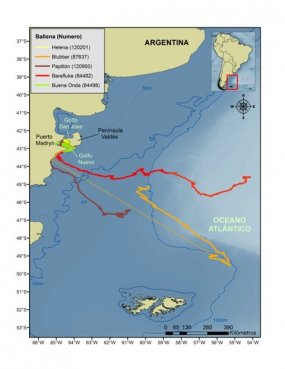 The tags are expected to stay attached to the whales for a month or possibly two. It’s hoped that by the time they stop transmitting, all five of the whales will have safely reached their summer feeding grounds, and scientists will have more pieces of this complex puzzle.