The critically endangered vaquita (see news item below) is not the only cetacean seriously threatened by gillnet entanglement. The small subpopulation of harbour porpoises (Phocoena phocoena) in the Baltic Sea has been drastically reduced, initially by large historical commercial catches in the Danish Straits and more recently by incidental mortality in fishing nets, primarily set and drifting gillnets. Other threats probably exist but are not well understood. Baltic Sea harbour porpoises are red-listed as Critically Endangered (click to see assessment).

The need for improved methods of collecting data on Baltic Sea porpoise numbers and range, and how these change over time, led to initiation of the Static Acoustic Monitoring of the Baltic Sea Harbour Porpoise (SAMBAH) project. which involved all EU countries bordering the Baltic Sea.  The overall objectives of the project were to develop and implement a best practice methodology and provide data for reliably assessing porpoise distribution and habitat.

Porpoise echolocation signals were recorded by acoustic data loggers called C-PODs deployed at 304 locations in waters 5-80 m deep throughout the Baltic Sea, making it one of the largest projects of its kind in the world – a huge collaborative effort. The project is now complete and the results have been released.

The number of harbour porpoises in the Baltic Sea was estimated as 447 (95% confidence interval 90–997). Seasonal distribution maps (see below) show a clear spatial separation of populations in the Baltic Proper and in the Western Baltic during May-December when the porpoises mate, give birth and nurse their calves. Spatial modelling of the acoustic data revealed a major breeding area of the Baltic Proper population around the Midsjö banks southeast of Öland, where the presence of porpoises had been virtually unknown previously. 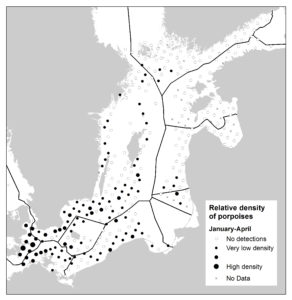 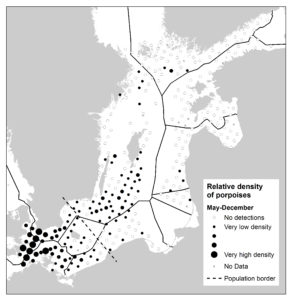 Image Caption: Dots indicate positions of acoustic data loggers (C-PODs) that recorded harbour porpoise echolocation signals in January-April, and May–December 2011 and 2012, combined. The line indicates the likely seasonal division between the population in the Baltic Proper and porpoises in waters to the west.

The combination of the new (albeit very imprecise) population estimate and the new information on porpoise distribution in space and time within the Baltic is expected to enable dedicated conservation action in areas where it is most needed. Also, the methodologies developed by the project offer new possibilities for assessing porpoise densities elsewhere using passive acoustics.