In late August 2020, Bruno Oberle, Director General of IUCN, and Jon Paul Rodriguez, Chair of the IUCN Species Survival Commission, signed a letter to the Secretary of the Department of Public Works and Highways in Manila, Philippines expressing concern about the likely impacts of the proposed Panay-Guimaras-Negros Bridges project on the Critically Endangered population of Irrawaddy dolphins in the Guimaras and Iloilo Straits.

Abundance of this population is estimated as only 10-30 individuals (Dolar et al. 2018).  The proposed entrances onto and exits from the bridge are in areas with relatively high densities of dolphins, and it is feared that the construction and operation noise will degrade this Important Marine Mammal Area. 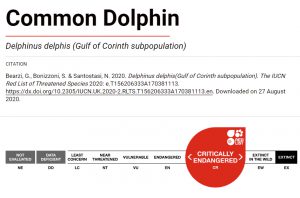 The Convention on Migratory Species has announced the publication of CMS Technical Series No. 43 Guidelines for the safe and humane handling and release of bycaught small cetaceans from fishing gear.  The Guidelines are available in English on the CMS website at www.cms.int/en/publications/technical-series.  These guidelines were commissioned by WWF and developed in consultation with a wide range of experts affiliated with the IWC and CMS.  They are intended for use in fisheries around the world, and include practical instruction cards that can be printed and laminated, as well as text providing the scientific underpinning for the practices that are recommended. 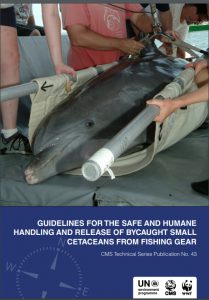 In 2018 WWF Peru and WWF Pakistan identified a need for these guidelines following observations of unsafe and harmful handling in releases of small cetaceans in fisheries in their national waters. WWF engaged in discussions with IWC, FAO, IOTC, CMS, ASCOBANS and ACCOBAMS who all agreed that while detailed guides for sharks, turtles and seabirds had been produced by various organisations, only one set of illustrated cards was available for small cetaceans (produced by ACCOBAMS). It was decided that an expanded document providing the scientific justification and rationale for safe handling and release practices in a range of fisheries would be useful. The draft guidelines were completed in July 2019 and circulated to a range of experts on cetacean biology, bycatch, and strandings, More than 20 of those experts provided feedback used by Derek Hamer and Gianna Minton to edit and finalize the document.

To make the guidelines practical and accessible for fishing crews, the document has pages at the end, designed so that a common cover page with core principles applicable to practices in all types of fisheries and fishing gear can be combined with a fishery-specific flip page, with clear illustrations and step-by-step instructions relevant to that fishery. These can be printed and laminated for use on deck, or viewed in electronic format from a phone or tablet. The protocols cover hook-and-line, gillnet, purse seine, and trawl fishing at both artisanal and industrial scale.