Concern over use of dolphins for bait in shark fisheries

The release last week of a newspaper article and accompanying video footage of dolphins in Peru being harpooned by fishermen and the flesh used as bait in the shark fishery has received considerable international attention<http://www.dailymail.co.uk/news/article-2465575/Dolphins-killed-bait-catch-endangered-sharks-Peru.html>.

The CSG has evidence that in addition to Peru, dolphins are, or have been, used as shark bait in a variety of other countries and regions, including East Africa and South America, and it is probable that the killing of dolphins, as a perceived free source of bait, is on the increase, driven by the lucrative shark fin trade.

At present very little information is available on the prevalence of this activity, but as many cetacean populations are small, with restricted distributions, and are already under pressure from other human activities, these directed takes are very likely to be unsustainable.  It is important that efforts are made to investigate the Peru story further, and to better understand and quantify this threat to dolphins in Peru and elsewhere. 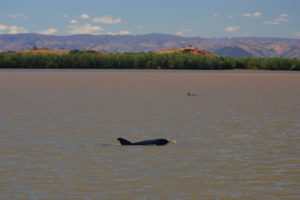 In 2008, approximately 100 melon-headed whales stranded in the Loza Lagoon system in Madagascar. The response effort was multi-faceted and included local people, government officials, conservation organisations and marine mammal experts. A significant amount of information was collected and, several years later, the International Whaling Commission facilitated a review of the circumstances of the stranding in conjunction with the US Marine Mammal Commission, the US National Oceanic and Atmospheric Administration, the US Bureau of Ocean Energy Management, ExxonMobil Exploration and Production (Northern Madagascar) Ltd, the International Fund for Animal Welfare, the Wildlife Conservation Society and the Government of Madagascar. An independent scientific review panel (ISRP) of five experts was invited to conduct a formal examination of the available facts.

Capturing a whale in a mangrove channel. Photographer: Yvette Razafindrakoto

The ISRP concluded that the mass stranding was primarily triggered by acoustic stimuli, more specifically, a multi-­beam echosounder system operated by a survey vessel contracted by ExxonMobil Exploration and Production (Northern Madagascar) Limited. According to the final report, this is the first known marine mammal mass stranding event of this nature to be closely associated with high‐frequency mapping sonar systems. Based on these findings, there is cause for concern over the impact of noise on marine mammals as these high‐frequency mapping sonar systems are used by various stakeholders including the hydrocarbon industry, military, and research vessels used by other industries. 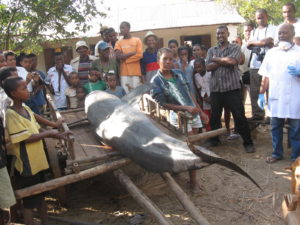 Initial strandings at Antsohihy were the subjects of huge fascination, and were brought into town for inspection by the local government veterinarian. Photographer: Unknown local resident

Links to the report, which became available on 25th September 2013 and the associated material considered by them can be found at http://iwc.int/2008-mass-stranding-in-madagascar

Click Here for the full press release issued by WCS and IFAW.

On the 4th of May 2013, marine tour operators working in Walvis Bay, Namibia, reported an ‘odd looking whale, possibly a gray whale’ to local researchers running the Namibian Dolphin Project (NDP). A few years ago, the presence of a North Pacific gray whale in the South Atlantic would have been dismissed out of hand, but the sightings in 2010 of a gray whale in the Mediterranean has changed ideas of what is possible. Analysis of photographs were conclusive, and confirmed that the animal was indeed a gray whale (Eschrichtius robustus). This is the first confirmed record of the species from the Southern Hemisphere that we know of and certainly the first in the South Atlantic.

A skin sample has been collected from the Namibian animal. We have no way of knowing the route followed by the whale to get to Namibia, but it seems most probable that it came via the North Atlantic, having arrived there via either the Northwest Passage across North America or the Northeast Passage across Eurasia. Climate change and specifically the reduction in ice coverage in the Arctic is making sightings such as this one less improbable.