In March 2015, by far the largest-ever reported mass mortality of baleen whales took place along the coast of southern Chile. At least 343 animals, primarily sei whales, died.  The discovery was made during a scuba diving expedition aimed to inventory the benthic fauna of the area between Golfo Tres Montes (Northern Golfo de Penas) and Puerto Edén. By chance the team discovered underwater recently dead baleen whales and whale skeletal remains near Estero Slight and in the Canal Castillo situated 235 km to the south.  This was followed by an aerial survey and analyses of satellite images to detect additional carcasses from this large and remote coastline.

The Golfo de Penas is one of the most important feeding grounds for sei whales, hosting the largest and densest known sei whale aggregations outside the polar regions. World-wide, Harmful Algal Blooms (HABs) are increasing, and large ones have been documented along the southern Chilean and Argentine coast lines. Factors associated with increasing HABs include nutrient run-off and coastal eutrophication, warmer waters, movements of ballast water, aquaculture and overfishing (IWC, 2017). 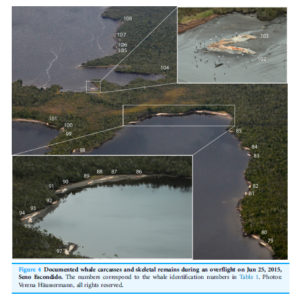 An investigation into the causes of the mass mortality event (MME) was conducted and it was concluded that the mostly likely cause of death was poisoning from a HAB during a building El Niño (Häussermann, et al. 2017). The combination of older and newer remains of whales in the same area indicate that MMEs have occurred more than once in recent years. The MME and its probable connection to a red tide event adds to the building evidence that marine mammals are among the victims of coastal development and global warming.