The subspecies Phocoena phocoena relicta is endemic to the Black Sea and whilst the total population size and trend are unknown, the subspecies is red-listed as Endangered. In recent months, unusually large numbers of neonates and juveniles have washed up on beaches along the Black Sea coasts of Bulgaria and Turkey. The waters there are known to be used by cetaceans for calving and breeding (Dede & Tonay, 2010). Large-scale mortality events have been reported in previous years, but the number of individuals this year has been exceptionally high, with up to 7.2ind./km stranded on the Turkish western Black Sea coast (more than 150 individuals found along a 22km stretch of coastline in July alone). Most were newborn (91%) harbour porpoises (97%), often less than 70cm long. It has been difficult to diagnose cause of death because most of the carcasses were in an advanced stage of decomposition by the time they washed up and were found. The situation in Bulgaria has been similar, with a peak of stranded porpoises, 61-77 cm long, in mid-July, and 6.6ind./km stranded on the Black Sea coast of southern Bulgaria (34 individuals in 3 days along 5.1 km of beach).

Unusual large-scale mortality events were observed in 2003 and 2009 (Tonay et al., 2012) and high mortality of neonates in the summers of 2010 and 2011 was thought to be related to the bottom-set gillnet fishery for turbot (Öztürk et al., 2012). The hypothesis was that lactating and nursing mothers had been caught in nets, resulting in the neonates starving to death and washing ashore. However, whilst this year the strandings seem to be dominated once again by neonates, the number of observed carcasses is much higher than was the case in previous mass mortality events.

Scientists at the University of Istanbul and the Turkish Marine Research Foundation (TUDAV) as well as Dimitar Popov of Green Balkans from Bulgaria, are investigating this year’s mortality event and the causes behind it. For a subspecies that is already considered Endangered, the high mortality of young animals, year after year, could be a serious impediment to recovery. 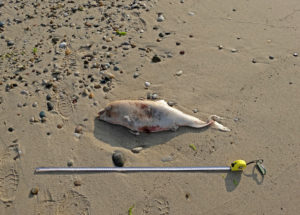 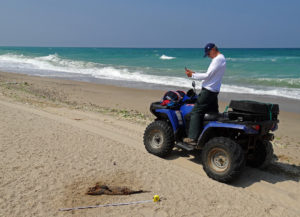 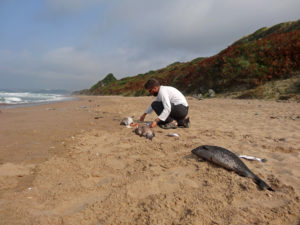 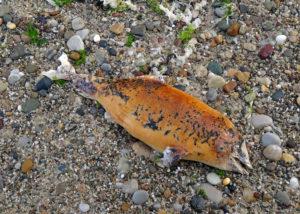