This update summarizes net removals from March and news about continuing violence leading to another suspension of net removal efforts. On 13 March a dead vaquita was found in a net by the Sea Shepherd net removal team (more details here). The headless carcass of the female was identified as a vaquita by the Universidad Autónoma de Baja California (University of Baja California-UABC) in Ensenada using genetics and by Museo de la Ballena y Ciencias del Mar (Whale and Marine Science Museum) using skeletal examination. A necropsy was performed by a veterinarian designated by Procuraduría Federal de Protección al Ambiente (Federal Attorney for Environmental Protection)-PROFEPA . With at most 22 vaquitas estimated to remain as of September 2018, the loss of this individual is yet another serious setback.

Following an announcement by the Mexican government that the compensation program to not fish would cease, the cooperatives belonging to the Fishermen Federation decided to return to active gillnet fishing, as a protest and without permits. The spawning season for the corvina (a smaller relative of the totoaba) is March to early May, and and the corvina fishery has been a major source of fishing income in the Upper Gulf. Corvina can be caught using gillnets to actively corral the fish, a practice that is believed to pose less risk to vaquitas than drift gillnetting because the noise from boat engines presumably frightens the vaquitas away from the vicinity of the fishing activity. Crew on the net removal vessels noted that most of the fishermen were staying away from the ‘zero tolerance’ area where the net removal efforts have been concentrated. Also, it is important to mention that fishery organizations indicated that even though their members would be out at sea and fishing, they would avoid the vaquita protection polygons.

On 28 March poachers cut loose a net that the Sea Shepherd vessel Sharpie was in the process of trying to remove. This incident (the Sea Shepherd report of which can be read here) resulted in the accidental shooting by the Navy of one of the poachers (who survived), the burning of the PROFEPA yard containing confiscated fishery items, and the burning of several boats. Later a storage yard outside San Felipe, Rancho el Dorado, that contained many of the nets removed this year was robbed. To date, there has been no punishment for any of these illegal activities.

The number of net removals in March increased as expected with the advancing of the totoaba spawning season. The removal of more nets in March outside the zero tolerance area was partly due to finding few nets inside that area of higher vaquita density (good news!). Removal effort this year is being concentrated on the area where vaquitas were last seen and heard. Like last year, 3 ships have been involved in net-removal efforts in 2019: the Narval (Museo de Ballena) and the Sharpie and Farley Mowat (Sea Shepherd). A summary of efforts during 2018 was given in the December 2018 vaquita update. 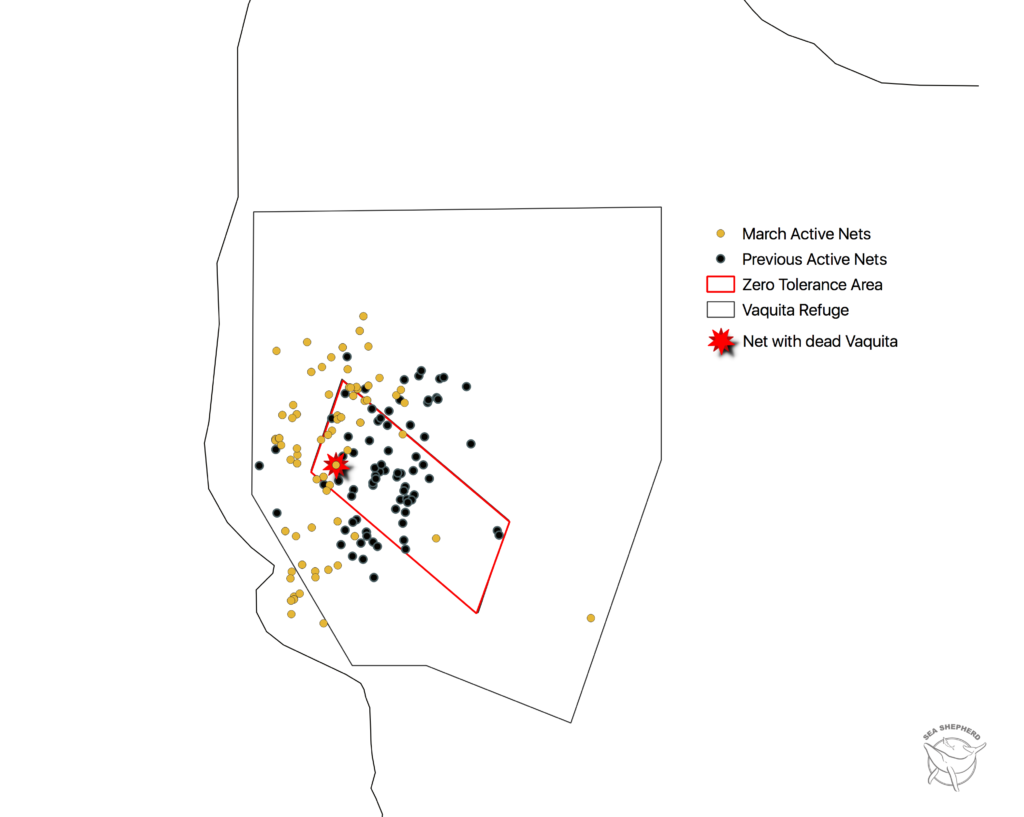 The map (Source: Sea Shepherd Conservation Society Internal Reports, 2019) shows the locations of active nets removed through March 2019 by the Farley Mowat, Sharpie and Narval (yellow dots for March and black dots for earlier this totoaba season). The black line shows the area of enhanced protection including both the Vaquita Refuge and the enhanced enforcement area recommended by CIRVA last year (2018). The slanted rectangle indicates the zero tolerance area that was recommended by CIRVA-11 (this year, 2019) for nets to be removed within hours of being deployed because this is an area where vaquitas were known to be concentrated in recent months according to acoustic monitoring and visual observations.