Indus River dolphins (Platanista gangetica minor) inhabit the Indus River system of Pakistan and India.  Over the last 150 years, numerous irrigation barrages (gated dams) that divert river water into canals have been constructed in this system.  As a result, the range of Indus dolphins has declined by approximately 80% since the 1870s due to habitat fragmentation and reduced river flows.  Survey results suggest that the entire subspecies numbers well under 2000 individuals and it is listed as Endangered on the IUCN Red List.  Indus dolphins persist in 5 barrage-partitioned sections of the Indus mainstem in Pakistan, and a tiny isolated population persists in the Beas River in India, some 600km away from all the others. 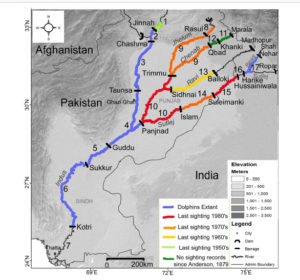 The current distribution of Indus River dolphins. The Beas River is located on the far eastern side of this map (segment 17 of the system). Reproduced from Braulik GT, Arshad M, Noureen U, Northridge SP (2014) Habitat Fragmentation and Species Extirpation in Freshwater Ecosystems; Causes of Range Decline of the Indus River Dolphin (Platanista gangetica minor). PLOS ONE 9(7): e101657. https://doi.org/10.1371/journal.pone.0101657

As recently as last year, there were estimated to be between 18 and 35 Indus dolphins in the Beas River above Harike Barrage (Shahnawaz Khan 2016).  During periods of low flow, they have been observed to move downstream into the head pond above the barrage, which includes the Harike Wildlife Sanctuary.  On 27th March, 2017 the flow of the Beas River was virtually stopped in order to allow maintenance works to the barrage and canal gates.  River flow dropped from approximately 30,000 cubic feet per second (cusecs) to just 1,100 cusecs.  Many aquatic animals perished including freshwater turtles and fish.  An extensive search was made for the resident river dolphins, but only 4 have been located to date.  It is feared that the remaining dolphins became stranded and died in shallow pools, or slipped through the barrage into downstream areas near the India-Pakistan border where the river is almost always completely dry and where they will also eventually perish.  However no dead dolphins have yet been reported despite the extensive search.

This sad situation demonstrates the vulnerability of river dolphins that today live only in heavily managed rivers.  If the needs of wildlife are not considered in the management of rivers and barrages, more environmental catastrophes can be expected.