One of the three Critically Endangered freshwater populations of Irrawaddy dolphins, Orcaella brevirostris, inhabits the Mahakam River, East Kalimantan, Indonesia. Analysis of tissues samples from 8 individuals indicated that this population has two unique genetic haplotypes compared to the coastal Irrawaddy dolphins in Northeast Kalimantan (Malinau), Thailand and Philippines. All sightings of pesut (as the dolphins are called locally) in the main Mahakam River during surveys between 1997-2012 were in the area between Muara Kaman (about 180 km from the river mouth) and the village of Tering (about 420 km from the mouth). Based on interviews, the distribution area could extend outside this area at some times of the year, both downstream (up to 90 km from the mouth) and upstream, where however it would be limited by the rapids upstream of Long Bagun (600 km from the mouth).  Pesut have also been found in the tributaries in the middle Mahakam, i.e. Kedang Rantau, Kedang Kepala, Belayan, Kedang Pahu, Pela, Semayang and Melintang Lakes, and in-between fast-flowing streams at about 20 and 100 km upstream of the Ratah River, which empties into the Mahakam at least 500km from the sea. 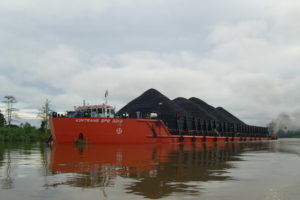 The mean number of detected dead dolphins per year between 1995-2013 is 4 (ca 4% of total population); total recorded deaths in 19 years: 79. Most deaths have been caused by gillnet entanglement (66% of 71 deaths with known cause) followed by vessel strike (10%).

Other threats include noise from high-speed boats and oceanic coal-carrier ships passing through core habitat, chemical pollution from coal-mining waste cleaning and large-scale mono-culture plantations (especially oil palm) and prey depletion as a result of unsustainable fishing (e.g. electro-fishing, poison and trawl). Displacement of dolphins from core areas has been caused by container barges moving through narrow tributaries, sedimentation of lake habitat and conversion of fish spawning areas into palm oil plantations. One example is the ‘Muara Pahu – Penyinggahan sub-districts area’ which had the highest density of dolphins before 2007 and was designated as a dolphin reserve in 2009. Dolphins have been observed less and less often by local residents and during four extensive surveys in 2010 and 2012, no dolphins were 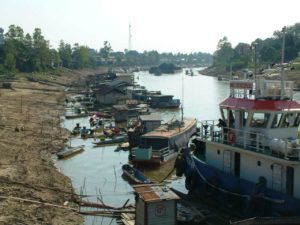 encountered there or in areas upstream of Muara Pahu, except for one isolated group that has resided in the Ratah River for the last 14 years.

Currently, conservation activities focus on gaining local governmental and community support to protect important dolphin habitat through multi-stakeholder workshops and preparing a management plan with tasks allocated to relevant organizations in each area. A major goal is to mitigate (or preferably eliminate) unsustainable fishing techniques, e.g. by introducing more sustainable fishing techniques, law enforcement, restoring and maintaining fish spawning areas and reducing pollution (chemical waste and boat noise). On a positive note, the government in the one district where dolphins still occur in good numbers (Pela/ Semayang –Muara Kaman area) is seriously considering a proposal to protect a50,000 ha area. All potentially affected villages participated in design of the proposed protected area and a final decision by the government is expected in early December.