In the autumn of 2007 there were two dolphin mass stranding events, involving at least 2 species (spinner dolphins, Stenella longirostris, and striped dolphins, Stenella coeruleoalba) and 152 individuals, along the coast of Iran.  Despite having 1700km of coastline the marine mammals of Iran are virtually unknown.  The large response of the media, and some controversy regarding possible causes of the strandings, led the Iranian Department of the Environment, and the Regional Organisation for the Protection of the Marine Environment (ROPME) in the Persian Gulf to invite the IUCN Cetacean Specialist Group to conduct an independent, retrospective, scientific investigation into the causes.  The investigation team consisted of two CSG members – cetacean biologist Gill Braulik and veterinary pathologist Antonio Fernandez. The team visited Iran from 21-25 November 2007, toured the stranding locations, and collated and scrutinised information, photographs, biological samples and video recordings from each event. 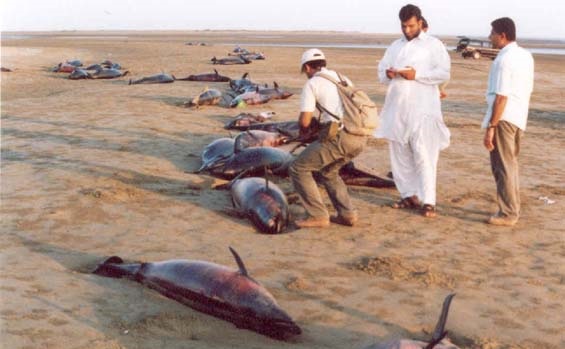 Conclusions of the Investigation

Both stranding events occurred on the Gulf of Oman coast near the town of Bandar Jask, and were separated by a month in time and more than 170 km in distance. The first event, on 20 September 2007, involved 79 animals, probably all spinner dolphins (Stenella longirostris). Dead animals, all exhibiting a similar degree of decomposition, drifted to shore along 13 km of coastline over a period of approximately 24 hours. These circumstances suggest that the mortality was caused by a single acute event at sea. Several carcasses had evidence of traumatic injuries, the stranding event was spatially and temporally coincident with an active fishing ground, and other potentially bycaught and discarded species were found on the beach. This pattern is generally consistent with the hypothesis that the dolphin mortality was caused by fishing operations, although the available data are insufficient to confirm that hypothesis unequivocally.

Participants of the Expert meeting on the Mass Mortality of Marine Mammals in Tehran, Iran.

On 24 October 2007 there was a mass stranding of 73 live striped dolphins (Stenella coeruleoalba), a pelagic species believed to be rare in the Gulf of Oman. The most likely explanation for this mass stranding is that the dolphin group was trapped by a falling tide among the complex sandbanks of the Kangan estuary. Striped dolphins are not normally found in shallow water or near shore, and their occurrence in this area is considered unusual. The factor or factors that caused them to enter this atypical habitat remain unknown.

The two mass mortality events involved different species and exhibited many different characteristics; there is no evidence to suggest that they were linked. 1.

Following on from the mass stranding investigation, Iran and the six other countries that border the Persian Gulf (Kuwait, Qatar, Bahrain, UAE, Oman and Saudi Arabia) requested the Cetacean Specialist Group to organize training workshops to guide each country in establishing national marine mammal stranding networks.  The objective of these stranding networks is to collect baseline data on marine mammals in the region and to be prepared to respond to future mass strandings.  A training workshop was conducted in Tehran from 16-19 November 2008 with 35 participants from 7 countries.  There were two days of technical lectures followed by discussion and development of a Regional Plan of Action on Marine Mammal Mass Mortality.  This included agreement to establish national stranding networks in each country bordering the Persian Gulf, provided standardized forms for collection of information during strandings, provision for establishment of a Regional Group of Experts on Mass Mortality of Marine Mammals and separate National Committees on Marine Mammal Mortality to oversee and manage mass mortalities and marine mammal strandings. 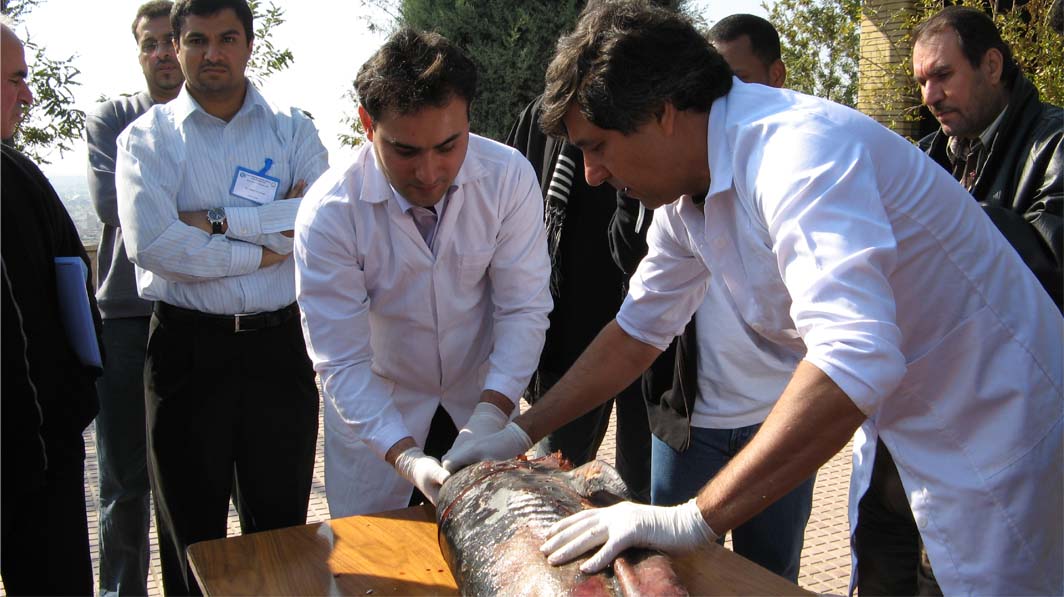