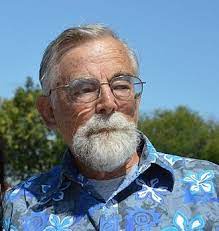 The world’s cetaceans – whales, dolphins and porpoises – lost one of their most effective champions on 11 July 2022 when Dr. William F. Perrin died at the age of 83 in La Jolla, California. He was surrounded not only by his wife Dr. Louella Dolar, herself a longstanding member of the IUCN SSC Cetacean Specialist Group (CSG) and an authority on marine mammals of Southeast Asia, and their son Joey, but also by a few of the countless students and colleagues who considered Bill a role model, mentor and friend.

Through his ground-breaking research on dolphin systematics, taxonomy, life history and population ecology, Bill had a huge influence on the field of cetacean conservation biology. At various times in his career as a senior scientist at the Southwest Fisheries Science Center of the U.S. National Oceanic and Atmospheric Administration, he served as, among many other things, president of the Society for Marine Mammalogy; editor of that society’s journal, Marine Mammal Science; instigator and lead editor of Reproduction in Whales, Dolphins and Porpoises (1984, International Whaling Commission [IWC]), Gillnets and Cetaceans (1994, IWC), and the first two editions of the Encyclopedia of Marine Mammals (2002 and 2009, Elsevier/Academic Press); a member of the Scientific Council of the Convention on Migratory Species (CMS), the IWC’s Scientific Committee and the U.S. Marine Mammal Commission’s Committee of Scientific Advisors. Notably, in 2008 he played a key role in establishing the CMS Memorandum of Understanding Concerning the Conservation of the Manatee and Small Cetaceans of Western Africa and Macaronesia. 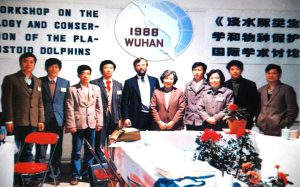 Bill Perrin (pictured in the center) chairing the Workshop on Biology and Conservation of the Platanistoid Dolphins organized by CSG at the Institute of Hydrobiology, Wuhan, China in 1986 (photograph courtesy of Wang Ding, pictured far right)

Of greatest relevance to the SSC is that Bill chaired the Cetacean SG from 1984 to 1991. Among the many ways in which he shaped our group and raised its profile as a major force in conservation, Bill compiled the first global cetacean Action Plan, published in 1988 (a slightly revised second edition was published in 1989). He had earlier played a lead role in organizing and chairing a Workshop on Biology and Conservation of the Platanistoid (River) Dolphins in Wuhan, China, which led to publication of an SSC Occasional Paper (No. 3, 1989), a volume that provided a framework, blueprint and rallying cry for efforts  to save the Yangtze River dolphin (baiji), which sadly failed, and for ongoing work by scientists and conservationists in South America and southern Asia to prevent further losses of freshwater cetacean diversity and abundance.

After stepping down from his position as Cetacean SG Chair, Bill continued for nearly three decades to function as an informal adviser to his successor, Steve Leatherwood (1991-1997), and to me (1997-present). He was instrumental in helping the SSC and CSG organize and carry out a Red List workshop in La Jolla in 2007 where we assessed all cetacean species. From then until 2013 when failing health made it difficult for him to continue, Bill served as the Cetacean Red List Authority Coordinator.

Portions of Bill Perrin’s foreword to our 1994 Conservation Action Plan for the World’s Cetaceans resonate as forcefully today as they did then, and they are worth repeating:

Cetacean diversity, like all biodiversity worldwide, is crumbling; we are losing it at a rapid and increasing rate. So we must redouble our efforts. Social, economic, and political factors will determine what we have left in a few years, and we need to understand and address those factors. If we don’t speak up, if we don’t go out of our way to prod and assist the managers, there will be no hope for continued abundance of whales, dolphins, and porpoises.