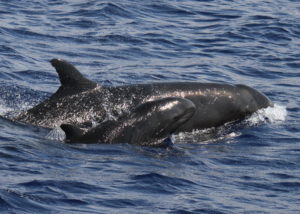 On November 28th, 2012 the U.S. National Marine Fisheries Service officially listed a distinct population segment of false killer whales around the main Hawaiian Islands as Endangered under the U.S. Endangered Species Act. This population, termed the Hawaiian insular population, inhabits the area around the main Hawaiian Islands, and is genetically differentiated from surrounding populations. Current abundance of the population is estimated at about 150 individuals, and there is evidence the population declined from more than 500 individuals in the 1980s. The population faces a number of threats, including bycatch in fisheries, ingestion of hooked fish, reduction of prey availability, high levels of persistent organic pollutants, and potentially retaliatory shooting by fishermen due to depredation of catch. The listing was in response to a petition submitted by the Natural Resources Defense Council in November 2010. More information on this listing can be found at http://www.fpir.noaa.gov/PRD/prd_false_killer_whale.html and on research on this population at http://www.cascadiaresearch.org/hawaii/Falsekillerwhale.htm