The impacts of underwater noise on marine cetaceans are starting to be relatively well understood across the world’s oceans. Noise can trigger responses ranging from avoidance to chronic stress, to permanent hearing loss and sometimes even stranding, injury, and mortality (see here for a recent review of impacts: Erbe et al. 2019; https://doi.org/10.3389/fmars.2019.00606). Direct investigations of the effects of noise on freshwater cetaceans, however, remain very limited.

Ganges River dolphins Platanista gangetica gangetica are listed as Endangered on the IUCN Red List, and are found only in the shallow, turbid rivers of the Indian subcontinent (India, Bangladesh and Nepal). They are almost blind and continuously emit high-frequency echolocation clicks to sense their environment, navigate, and locate prey (fish and shrimp). Importantly, Ganges River dolphins do not produce whistles, and their acoustic repertoire is restricted to modulations of their clicks. A belief even among some experts has been that the mostly low-frequency underwater noise from vessel engines does not affect these river dolphins. However, riverine environments have different background conditions that can complicate assessments of noise impacts on dolphins. Reverberation and reflection effects in shallow river habitats are complex. Further, space is naturally restricted for river dolphins, limiting their ability to avoid vessel traffic and noise as both vessels and river dolphins need adequate depth.

A study published in Scientific Reports https://www.nature.com/articles/s41598-019-51664-1 by Mayukh Dey, Jagdish Krishnaswamy, Tadamichi Morisaka, and Nachiket Kelkar shows that underwater noise, especially that produced by propeller-induced cavitation, can alter the acoustic behaviour of dolphins in the Ganga River in India. At a point in March when vessel traffic peaked and recorded flows in the river were at their lowest, the dolphins actually suppressed their echolocation activity (click rate) and  also showed shifts in the peak frequency and sound pressure level of their clicks, indicating fairly significant impacts of ambient noise on echolocation. The noise also masked their communication clicks, and caused increases in metabolic stress.

The study also found that at shallow river depths, the impacts of underwater noise were even more severe. It thus highlighted the importance of considering underwater noise pollution as a factor that should be considered in the management of ecological flows in the Ganga mainstem and in tributaries where waterways for ship navigation are planned.

The study attains particular importance in today’s conservation context. Many large rivers in the Ganga-Brahmaputra basin, where river dolphins occur, are to be transformed into major waterways by the Government of India. In 2016, a letter jointly signed by the IUCN Director-General and the Chair of the Species Survival Commission, expressed concern about the potential impacts of waterways development on river ecology and dolphin conservation: https://iucn-csg.org/iucn-letter-to-the-indian-minister-of-environment-concern-over-the-impact-of-indias-national-waterways-act-on-ganges-river-dolphins/. Between 2016 and 2019, the issue has been discussed often in environmental policy debates in India. Indian waterways authorities are also in the process of conducting studies on the impacts of dredging and noise on the dolphins. It is expected that the findings of this recent study by Dey et al. will inform the species recovery programs and conservation initiatives being carried out for the species at national and state levels and by civil society (NGOs).

Spectrogram showing the echolocation clicks of a Ganges river dolphin (top), and another spectrogram of clicks (bottom) when a motorised vessel passes. The clicks that are seen to be masked, are masked by cavitation noise. The high-frequency range of such noise clearly interferes with the acoustic signalling of Ganges river dolphins. Graphs: courtesy of Dey et al. (2019). 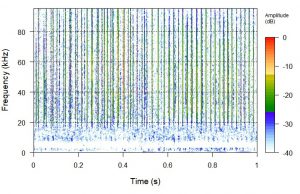 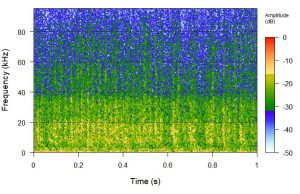