On March 27 the Mexican Navy recovered a decomposed vaquita. A necropsy was conducted on April 4 and it was confirmed that the animal died from entanglement (see Necropsy Report). 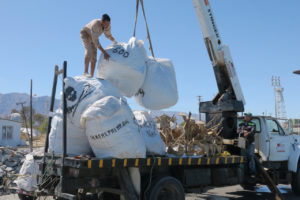 With fewer than 30 vaquitas remaining and the idea of rescuing some by capturing them and placing them in a managed enclosure not considered viable, conservation action is now focused on enforcement and net removal.

The current enhanced net removal effort during the totoaba spawning season will last until May 2018. Because the net removal effort is critical to saving the vaquita, progress is updated on this website monthly (see previous updates for Feb and Jan here). 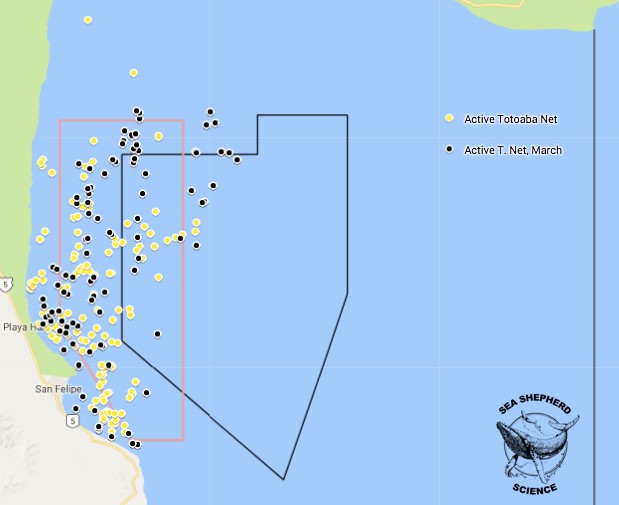 The map (Source: Siegenthaler, N. 2018. Sea Shepherd Conservation Society Internal Reports) shows active nets removed from December 2017-March 2018 by all net removal operations. The yellow dots are active totoaba nets removed prior to March and the black dots those removed during March only. The black line denotes the Vaquita Refuge and the orange line the enhanced enforcement area.

The table below shows the number of totoaba nets removed, by ship, during the totoaba spawning season. JPD stands for the ship Jean Paul Dejoria, which was replaced by the Sharpie in March. The Narval belongs to the Museo de Ballena of La Paz and the other ships to the Sea Shepherd Conservation Society. “na” stands for ‘not applicable’ since the ships did not operate in that month. 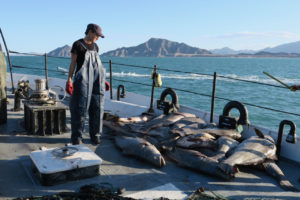 Despite focusing the enhanced net removal efforts and enforcement in areas of overlap between vaquita distribution and illegal fishing activity, the removal of active totoaba nets is apparently following the pattern of the last two years, which has resulted in the continuing dramatic decline in vaquita numbers.  Direct comparisons of the number of nets removed by Sea Shepherd efforts in different years are not valid because the nature of the effort has been evolving (details in this Report by visiting CIRVA members). The searching efficiency of the net retrieval vessels has increased due to the use of sonar, while the illegal fishermen have become better at avoiding net retrieval by spotting search activities and setting their nets at times and in places where they are less likely to be discovered.  However, the data in the table and figure clearly indicate that illegal fishing persists.  So far, there is no indication that enhanced enforcement is being effective.