Enforcement paying off for the Atlantic humpback dolphin of Western Africa

Enforcement paying off for the Atlantic humpback dolphin of Western Africa

Like many threatened species, the Vulnerable Atlantic humpback dolphin (Sousa teuszii) is under pressure from anthropogenic activities. Industrial and commercial scale fishing forces locally-based artisanal fishers to within 200 metres of the beach – using their nets in critical habitat for this poorly understood marine mammal. In a recent field report to SOS Save our Species, who funded the work, Tim Collins from the Wildlife Conservation Society (WCS) and IUCN CSG Member, reports on the impact of routine and frequent surveillance patrols in the waters of Conkouati-Douli National Park (CDNP), in the Republic of Congo – one of two project sites- to deter and intercept the trawlers that are deemed the root cause of the problem.

Humpback dolphins near the border of Gabon and Congo. They are known to routinely traverse this frontier. Photo Credit: Tim Collins

According to project director, Tim Collins, patrols have intercepted 15 trawlers (both metal hulled and wooden vessels) fishing illegally in park waters since December 2013. He explains that with a limited number of eco-guards on a single patrol boat, it is difficult to board every illegal vessel in the area, and typically some flee during intercepts. More recently, park waters have become empty of trawlers during the day, but vessels have started to come in after dark, usually around 8-9pm, leaving again by 5-6am, while Tim and colleagues evaluate how to adapt to this new pattern of activity. One option being discussed is to head out late in the day, heading into deeper water under cover of darkness, anchoring at sea. Trawlers fishing illegally would be intercepted at first light when they are heading back out to sea, explains Tim, although this is not without risk, he adds! 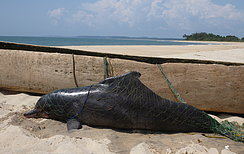 Commenting on intercepted fishing boats, Tim explains these are generally registered locally with crews comprising a mix of Congolese and Chinese expatriates. In each case, skippers and vessels’ paperwork were taken into custody and brought to land for prosecution, and in most cases, the vessels themselves were escorted to the anchorage near coastal villages to facilitate processing of fines and confiscation of gear. In addition some larger West African pirogues fishing with long filets dormant – bottom set gill nets often over 2.5km long – with Congolese, Beninese, Ghanaian and Senegalese crews, have also been found in the park. All of these have been made to recover their nets and advised on where park limits lay. These boats are treated more leniently although are always provided with a warning.

Crucially, funds collected from the fines have been reinvested in strengthening enforcement in the national park with a part set aside for funding local fisheries cooperatives. This has been incredibly important for the project and fishers alike according to Tim. “We promised fishers that we would take action and in return they would honour an agreement to free the inshore strip – dolphin habitat. Being able to complete missions and return some of the financial benefits is critical and is helping to generate local support and buy-in”. This is extremely hard to do in a place where most people live from meal to meal and have very little room to make personal sacrifices, or risk loss such as moving their nets back into a risky area.

While part of the solution involves removing the trawler threat, the project’s sustainable impact comes from improving stakeholder management of local fisheries, in conjunction with the creation of local fishing cooperatives to improve management of artisanal fisheries. The positive results of the marine patrols, along with the efficient and clear reinvestment of fine funds into park management and the creation of local fishing cooperatives, attest not only to the success of the conservation initiative but also to the interest of both national authorities and local communities to enforce regulations and improve the conservation prospects of coastal dolphins and other species within CNDP. For more information about this project’s work in Mayumba National Park (Gabon) and Conkouati-Douli National Park (Republic of Congo) please visit the project page here.

News article is reproduced from SOS Save Our Species: the original article is at this link