December marks the beginning of totoaba spawning season.  As was done in the 2017/2018 spawning season, vaquita updates will be posted monthly.  In this first update, a recap of last season is given to provide context.

The 2017/2018 totoaba spawning season had 400 active totoaba nets removed and one dead vaquita found that had died of gillnet entanglement. 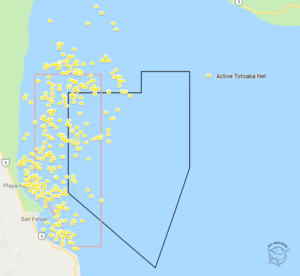 The data clearly show that illegal fishing remained at a very high level in areas known to have contained vaquitas last fall.

Acoustic monitoring was conducted in the typical period from mid-June through mid-August.  An effort to photographically identify and potentially biopsy vaquitas last September resulted in seeing at least six vaquitas including two healthy calves. A CIRVA meeting scheduled for mid-February will consider these new data together with new data on net retrievals.

The data so far for net removal (through December 2018) are 41 active totoaba nets from the Sea Shepherd Conservation Society ship Farley Mowat, which is greater than the number retrieved in December 2017 (see above). 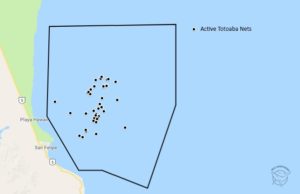 The map (Source: Sea Shepherd Conservation Society Internal Reports. 2019) shows active nets removed in December 2018 by the Farley Mowat only (black dots).  The black line shows the area of enhance protection including both the Vaquita Refuge and the enhanced enforcement area recommended by the last CIRVA meeting.