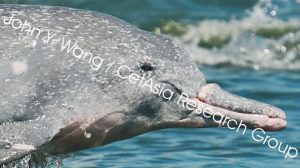 Photograph of Joker with his distinctive lip gash as well as an unpigmented (white) healed line scar on the front edge of the flipper. Photograph by: John Y. Wang / CetAsia Research Group.

On 21 January 2022, the Taiwan Ocean Conservation Administration (OCA) was informed by the public of a dead stranded dolphin at Anping Fishing Port, Tainan City. Marine biology experts and inspectors were on the scene and sent the carcass to the Annan campus of National Cheng Kung University for necropsy. The animal was determined to be dolphin number OCA038 in the OCA’s White Dolphin Database. Necropsy revealed a juvenile male Taiwanese White Dolphin with fresh scars, and developmental abnormalities due to injuries caused by past gillnet entanglement.

This dolphin was later identified by experts in the CetAsia Research Group as an approximately 12-year-old male named ‘Joker’ because of a distinctive lip-to-lip scar across his beak from a previous gillnet entanglement. While his cause of death is uncertain, gillnet entanglement is a common issue among Taiwanese White Dolphins. A study by the CetAsia Research Group in 2017 found that about 58% of Taiwanese White Dolphins had suffered major human-induced injuries, mainly from gillnets. Joker’s mother, known as Cupcake, was well-known due to the severe mutilation of her body caused by fishing gear entanglement in 2012. Her most recent calf, born in 2015-16 was also observed in 2017 with a line wrapped around its torso. 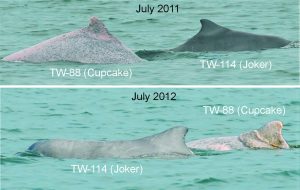 Photographs of Joker with his mother, Cupcake, taken in 2011 (prior to Cupcake’s entanglement) and 2012 (lines cutting into Cupcake’s dorsal fin and back can be seen). Photographs by: John Y. Wang / CetAsia Research Group.

The Taiwanese White Dolphin Recovery Plan in 2019 clearly states that a ban on gill and trammel nets in the entire habitat of the dolphins is urgently needed. The plan proposes a solution characterized as a “win-win-win” through a buy-out program, brokered between the government and wind-farm developers, meant to appease competing interests. Gillnet fishers would be compensated and provided with assistance in switching to alternative fishing methods. 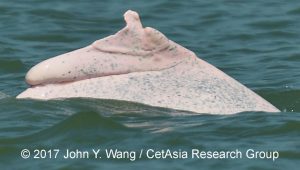 The resultant severe mutilation of Cupcake due to lines cutting through her dorsal fin and back. Photograph by: John Y. Wang / CetAsia Research Group.

The Taiwanese White Dolphin (Sousa chinensis taiwanensis) is a subspecies that is endemic to Taiwan and Red-Listed as Critically Endangered. A recent study showed the total population to be declining and numbering fewer than 65. These dolphins only inhabit a narrow strip of shallow waters along Taiwan’s heavily developed west coast, where fisheries are considered the greatest threat. Joker’s demise generates urgency for coordinated efforts among relevant stakeholders to prevent the extinction of Taiwan’s sole endemic cetacean.