This update summarizes net removals from February and news that also includes the first half of March.  The Report of the 11th meeting of CIRVA is summarized in an earlier news item on this website.  On 13 March a dead vaquita was found in a net by the Sea Shepherd net removal team (more details here).  The headless carcass of the female was identified as a vaquita by the University of Baja California in Ensenada using genetics and skeletal examination. With at most 22 vaquitas estimated to remain as of September 2018, the loss of this individual is very grave.

A new publication “Likely annual calving in the vaquita, Phocoena sinus: a new hope?” was published in Marine Mammal Science.

The number of net removals in February was lower than that in February 2018 but the effort this year was primarily in the last 2 weeks of the month because the Sea Shepherd ships were undergoing repairs and being modified to make them better able to withstand attacks from poachers.  Another difference between 2018 and 2019 is that net removal effort this year is being concentrated on the area where vaquitas were last seen and heard.  Like last year, 3 ships are removing nets:  the Narval (Museo de Ballena) and the Sharpie and Farley Mowat (Sea Shepherd).  A summary of efforts during 2018 was given in the December 2018 vaquita update.

The map below (Source: Sea Shepherd Conservation Society Internal Reports, 2019) shows the locations of active nets removed through February 2019 by both the Farley Mowat, Sharpie and Narval (yellow dots for Feburary and black dots for earlier this totoaba season).  The black line shows the area of enhanced protection including both the Vaquita Refuge and the enhanced enforcement area recommended by CIRVA  last year. 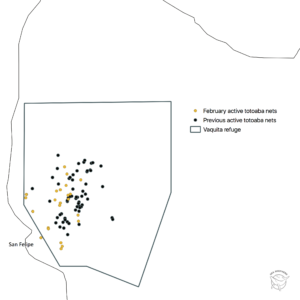