From October 6th to 9th, 2019, the IUCN Species Survival Commission (SSC) in alliance with the Environment Agency Abu Dhabi (EAD) held the Fourth SSC Leaders Meeting in Abu Dhabi, United Arab Emirates.  This meeting has taken place every four years since it was first held in 2008, and provides an opportunity for all of the committees, subcommittees, specialist groups and  Red List Authorities that are part of the SSC to meet, compare notes, become inspired by one another’s work, and discuss ways to strengthen and improve future work.

In a mixture of plenary presentations and smaller parallel breakout sessions, the roughly 300 participants addressed a wide range of issues including: 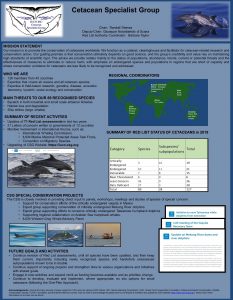 Poster giving details of the mission, goals and activities of the Cetacean Specialist Group displayed at the SSC meeting

The Cetacean Specialist Group was represented by Barbara Taylor, the CSG Red List Authority focal point,  Erich Hoyt and Giuseppe Notarbartolo di Sciara, who also represented the Marine Mammal Protected Areas Task Force, and Gianna Minton, who attended in her capacity as a member of the SSC Marine Conservation Committee.  This strong representation allowed the CSG to ensure that cetacean perspectives were represented in the marine-, freshwater-, and mammal-themed break-out groups, and to contribute to discussions on the future of the SSC.

The CSG team were also able to learn from the many other species and conservation experts at the meeting representing taxa ranging from fungi through sharks, large cats and everything in between. It was fascinating to learn more about how other specialist groups tackle the challenges of their Red List assessments (some groups need to assess 10’s of thousands of species!), management of membership, and making the most of the volunteer efforts of members.

The Red List Authority training clarified that listing dates are assigned according to the date of assessment submission and that submission by the deadline does not guarantee that an assessment will be formally published/released with the next set of listings.

The meeting also provided several opportunities for participants to be updated on the work of the Marine Mammal Protected Areas Task Force, and most notably the identification and implementation of Important Marine Mammal Areas (IMMAs). Since the last Leaders Meeting in 2015, more than 130 IMMAs have been identified across the Indian and South Pacific oceans, as well as in the Mediterranean Sea. For more information, read here.

Randall Reeves, chair of the CSG, was unable to attend the meeting but was awarded the prestigious Sir Peter Scott Award for Conservation Merit for his contributions to both the CSG and International Whaling Commission.

Finally, the meeting concluded with the the Abu Dhabi Call for Global Species Conservation Action, a statement issued on behalf of all participants calling for urgent and effective action to address the unprecedented, unsustainable and growing impacts on wild species from human activities.