Baleen whales in the cross hairs: potential for increased ship strike risk in and near Bering Strait

Baleen whales in the cross hairs: potential for increased ship strike risk in and near Bering Strait

Currently trans-Arctic shipping is conducted along the Northern Sea Route (NSR) and the Northwest Passage (NWP), with a Transpolar Sea Route (TSR) anticipated by mid-century1.  The NSR, which extends from the Barents Sea to the Bering Sea, is roughly 40% shorter than commercial sea routes through the Suez Canal.  Shipping along the NSR increased from 10.7 million tons in 2017 to a record-breaking 32 million tons in 20202.  To date, most shipping along the NSR has occurred from July-November, with peak traffic in September coinciding with minimum annual sea ice cover. With continued loss of sea ice, commercial shipping across all routes likely will increase in terms of both rates of passage and season length, as exemplified by the first-ever voyages of liquid natural gas (LNG) tankers along the NSR in January 2021.

All trans-Arctic shipping routes converge at the narrow (85 km) and shallow (50m) Bering Strait1.To navigate safely, ships must travel along a constricted route as they approach and depart the strait, making these waters especially perilous for large whales that migrate through and feed in the area.

The migratory habits of the Arctic endemic bowhead whales (Balaena mysticetus) have kept them mostly out of harm’s way, as the Bering-Chukchi-Beaufort population of bowheads generally spends the summer months in the Beaufort Sea.  Conversely, sub-arctic species including gray, humpback, fin and minke whales are now common near the Bering Strait region during summer months.  One source of recent sighting data is a ‘marine mammal watch’ conducted as standard protocol during research cruises that comprise the Distributed Biological Observatory (DBO)3.  Collectively, baleen whale sightings from DBO cruises conducted from July-October 2009-2019 showed the concentrated distribution of gray whales north and south of the Bering Strait, with humpback, fin and minke whales frequently seen primarily north of the strait (Figure 1).  All species in the region are there principally to feed in summer, thus less likely to be responsive to oncoming ships and therefore at risk of injury or death by ship strike. 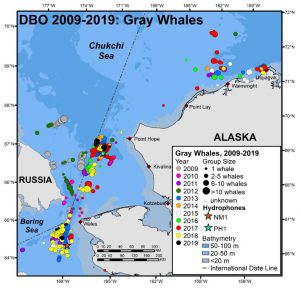 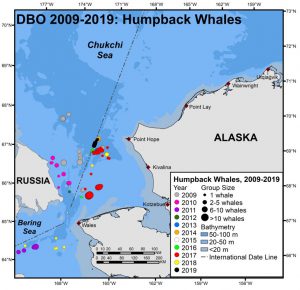 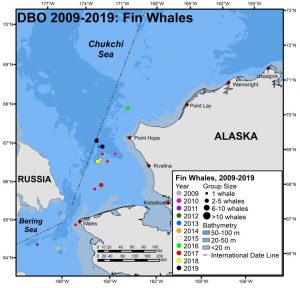 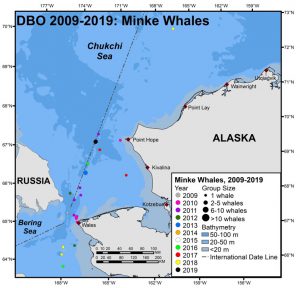 A number of international efforts to mitigate risks to baleen whales from ship strike are under way, the most relevant being the Arctic Marine Shipping Assessment (AMSA), a project of the Arctic Council PAME Working Group4.  Goals of the AMSA are bolstered by work in both the Conservation and Scientific Committees of the International Whaling Commission (IWC) to reduce ship strikes on baleen whales worldwide5.  To support the goals of these international organizations, the marine mammal sightings initiative of the DBO should be expanded to include experienced observers on more research and commercial ships passing through Bering Strait.  This effort to increase visual sightings should be coordinated with passive acoustic detection efforts in near real-time to better mitigate ship-whale interactions.  At present, such multi-faceted ship strike mitigation efforts are focused solely on endangered species at busy ports (e.g. North Atlantic right whales in Boston Harbor), but existing technologies could and should be brought to the Bering Strait gateway soon.