*This article is a re-post of a recent WWF media release http://wwf.panda.org/wwf_news/?278471/Arabian-Sea-humpback-whales-one-of-only-four-populations-still-considered-endangered-after-lengthy-US-review

Following an extensive review process that started in 2009 and was finalized in September 2016, the United States’ National Oceanic and Atmospheric Administration has revised the status of humpback whale populations around the world under the US Endangered Species Act (ESA).  The modified listing recognizes the Arabian Sea population as one of only four humpback whale populations around the globe that is not recovering from historical whaling, and is at high risk of extinction without serious conservation efforts. 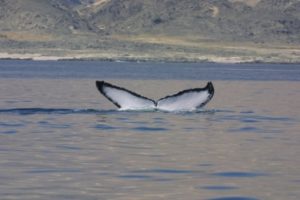 A Biological Review Team examined hundreds of scientific studies and reports that demonstrate how the majority of humpback whale populations around the world are increasing following the International Whaling Commission’s ban on commercial hunting of this species in 1966.  Careful consideration led to the designation of fourteen “Distinct Population Segments” (DPS), nine of which are no longer considered to be in immediate danger of extinction, and have thus been “de-listed”.  A DPS is treated equivalent to a species under the ESA.

However, five populations have not shown the same signs of increase toward recovery, and are still listed as Endangered or Threatened.  Of these, the Arabian Sea population is the smallest, most distinct, and most at risk.  Its range is believed to extend from the coasts of Yemen and Oman in the west to Iran, Pakistan and India in the east.

Map showing the 14 humpback whale Distinct Population Segments (DPS) now recognized under the United States’ Endangered Species Act. Of the four populations that remain Endangered, the Arabian Sea population (number 14 on this map), is considered the most distinct and the most likely to become extinct without conservation intervention. Source: http://www.nmfs.noaa.gov/pr/species/mammals/whales/humpback-whale.html

The Biological Review Team that conducted the 6-year long review process considered evidence from the Arabian Sea that includes information on illegal hunting of whales by Soviet whaling fleets in the 1960’s, fifteen years’ worth of dedicated whale research off the coast of Oman, and a few opportunistic sightings and strandings of whales along the coasts of Pakistan and India.  Data from Oman provide evidence that the population is extremely small, numbering fewer than 100 individuals, and confirm the Soviet whalers’ speculation that Arabian Sea humpback whales comprise the only non-migratory population of humpback whales in the world.  Genetic evidence shows the population to be distinct and no longer in breeding contact with any other humpback whale populations in the Indian Ocean.

These factors, coupled with ever-increasing threats from entanglement in fishing gear, strikes by vessels in some of the world’s busiest shipping lanes, and noise from shipping, coastal development and offshore oil and gas exploration, are cause for serious concern.  The population also has high levels of liver abnormalities and skin disease, which may render them more vulnerable to other diseases or stressors. Furthermore, this non-migratory population, restricted to the “cul de sac” of the Arabian Sea, has no alternative feeding or breeding grounds should climate change or an environmental disaster on the scale of the Deepwater Horizon irrevocably change the dynamics of their limited habitat. 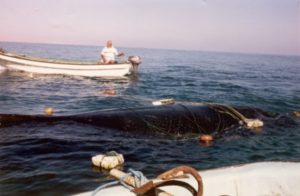 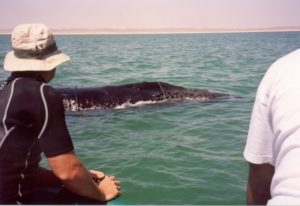 A humpback whale entangled in a gill net off the coast of Oman (© Environment Society of Oman).

While the Endangered Species Act most directly affects whales present within US waters, it also applies on the high seas to any vessels or persons under US jurisdiction.  The notice states that while the International Whaling Commission (IWC) and the Convention on International Trade in Endangered Species of Wild Fauna and Flora (CITES) provide significant protections to all large whales, there are no formalized governmental or inter-governmental conservation efforts for the Arabian Sea humpback whale.  To address the lack of coordinated effort to save this population from extinction, whale researchers and conservation organisations from Arabian Sea range states have joined together in the Arabian Sea Whale Network.  Very much a grass-roots initiative, this network strives to support whale research and conservation efforts in the region.  Together with the Wildlife Conservation Society (WCS), The Environment Society of Oman and the US Marine Mammal Commission, WWF has played a critical role in supporting the formation of this network.

Network members in Pakistan, India, Oman and Iran are conducting research to better describe the range and status of the population and working with local stakeholders to mitigate threats, but they lack sufficient funding.  As a result, we know almost nothing about the whales’ current distribution, numbers, or specific habitat needs in their suspected range outside of Oman. Funding is also needed at a regional level to support training and awareness-raising at all levels, and to better coordinate collaborative research and conservation work. Overall, without significant governmental efforts and stakeholder involvement to reduce the threat of whale entanglement in fishing gear along all the coastlines of its range and to address the risk of ship-strike in corridors of high shipping activity, the outlook for the Arabian Sea humpback whale population looks bleak.  Cooperation has been successful in other regions of the world as in the ongoing efforts to conserve gray whales in the western Pacific. Only through collaboration by governments, NGO’s, IGO’s, industry and other relevant stakeholders can we hope to overcome the odds and address the threats to Arabian sea humpback whales.