Following the 28 March incident (Sea Shepherd report can be read here), net removal operations were temporarily suspended. The Narval did not return in April and the Farley Mowat and Sharpie worked only during the last half of April. Sea Shepherd added a third larger ship named White Holly. Crews are confident that there are no longer any active totoaba nets in the ‘zero tolerance’ area due to extensive patrolling of this and surrounding areas (see map below).

However, following an announcement by the Mexican government that the program to compensate fishermen for not fishing would cease, many returned to gillnet fishing without permits. Fishermen working on the net removal vessels reported that some of those who were back on the water fishing were staying away from the zero tolerance area where the net removal effort is concentrated. However, others are actively gillnetting within the area and refuse to move when requested (see radar image and map of pangas spotted by radar).  Because these fishermen stay with their nets, the nets are not removed.  The relatively extensive ongoing illegal gillnetting represents a clear danger to the few remaining vaquitas and it impedes the deployment of acoustic monitoring devices.  Without acoustic data to guide researchers to the locations of vaquitas, planned photo-identification work has been delayed until the fishing has essentially stopped. 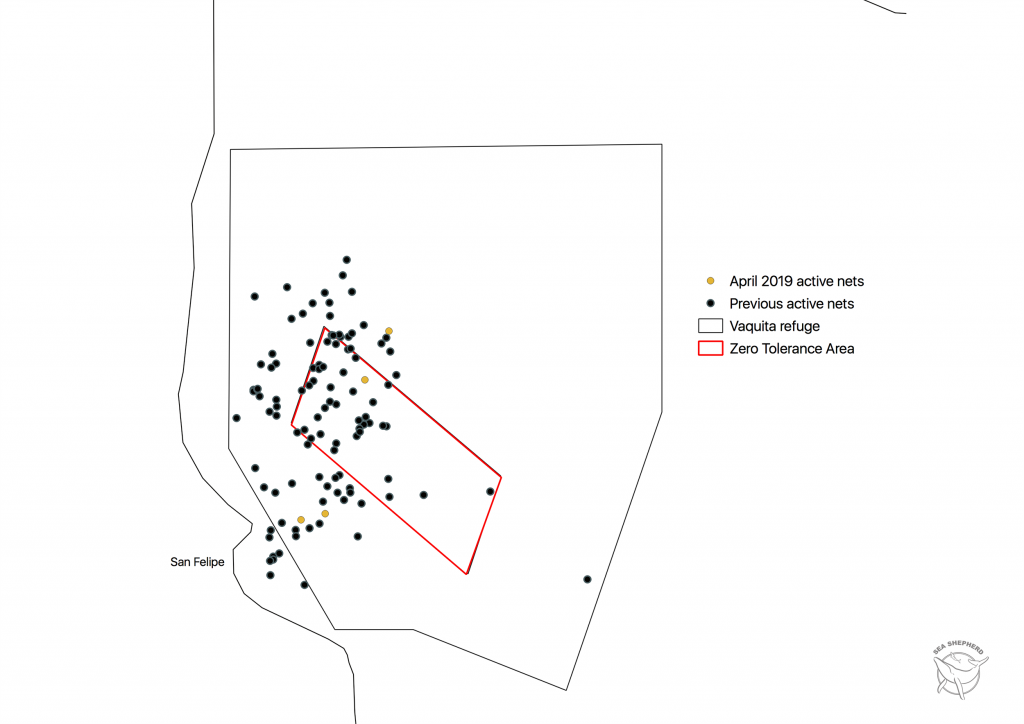 The map (Source: Sea Shepherd Conservation Society Internal Reports, 2019) shows the locations of active nets removed through April 2019 by the Farley Mowat, Sharpie and Narval (yellow dots for April and black dots for earlier this totoaba season).  The black line shows the area of the enhanced enforcement program which includes both the Vaquita Refuge and the exclusion zone that was recommended by CIRVA in 2017.  The slanted rectangle indicates the zero tolerance area that was recommended by CIRVA this year for nets to be removed within hours because this is a particularly high-use area for vaquitas. 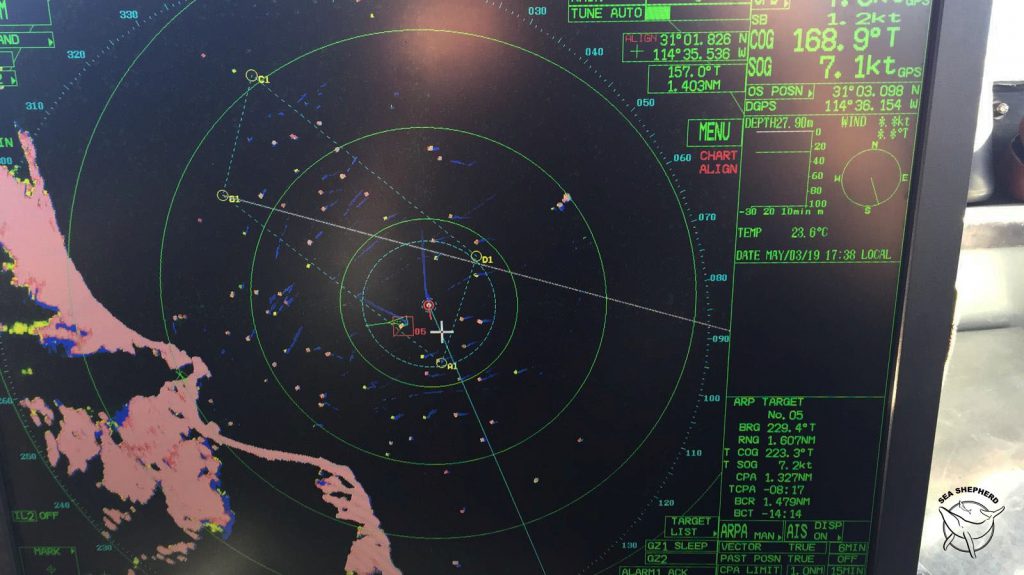 An image of the radar screen on 3 May 2019 at 5:38 pm (Pacific Daylight Time).  The position of the ship is in the center of the image as a red circle. The zero tolerance area known to have the highest density of vaquitas is the slanted rectangle outlined by a dashed line. The bright dots (at least 60 visible, with 15 inside the zero tolerance area) are panga positions. Typically each panga sets at least one gillnet over 1 km long, so at a minimum there was likely at least 15 km of gillnet hanging inside the area inhabited by the last few vaquitas. 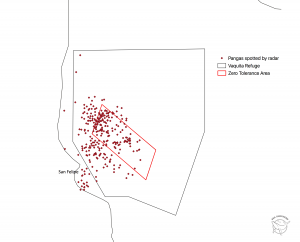 Map of positions of pangas shown on radar over a 2-week period in April 2019. Because the same panga may be recorded multiple times, the map should be interpreted as showing the general pattern of use and not the number of pangas present in the area at a given time.  The primary conclusion is that a great deal of gillnetting has continued to occur within the area of highest density of vaquitas, with no clear evidence that fishermen are avoiding that area.