Following two global conferences (Hawaii, 2009; and Martinique, 2011) hosted by the ICMMPA, the Task Force was developed through the WCPA, the SSC and the ICMMPA to give a stronger voice to marine mammal needs within IUCN and to serve the larger marine mammal protected area community of practice.

Objectives of the new Task Force include:
a) facilitating mechanisms by which this community of practice can collaborate, share information and experience, access and disseminate knowledge and tools for establishing, monitoring, and managing marine mammal protected areas (MMPA) and promote effective spatial solutions and best practices for marine mammal conservation;
b) bolstering capacity within the MMPA community by exposing it to state-of-the-art tools from the wider MPA and place-based conservation world;
c) enabling the implementation of global MPA targets and agreements; and
d) enhancing opportunities for cooperation, communication, exposure of related products and expertise to a far wider audience.

Task Force products and activities will likely include: publications, guidelines, best-practice guidance (e.g., in the Protected Planet series); consolidation and coordination of the global community of practice; outreach (conference presentations, workshops, website, social networks); application of new technologies (e.g., Google tools); provision of information on activities to WCPA Marine and to SSC, and for protected area news in and outside of IUCN, as appropriate, on a regular basis; supporting pursuance of WCPA, SSC and IUCN goals where appropriate; and supporting relevant resolution drafting and World Park Congress planning and participation. 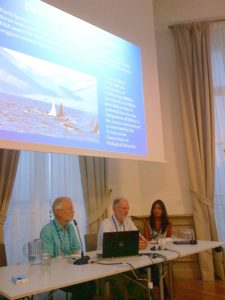 The Task Force’s first initiative consists in the development of Important Marine Mammal Areas (IMMAs), a working term we have devised to describe discrete portions of habitat, important to marine mammal species, that have the potential to be delineated and managed for conservation. IMMAs can be seen as a potential ‘marine mammal layer’ which represent a pre-selection for consideration by governments, conservation groups, and the general public of areas that deserve consideration for space-based protection. In addition, by linking IMMAs to the larger world of the Convention on Biological Diversity’s Ecologically or Biologically Significant Areas (CBD EBSAs), IUCN Key Biodiversity Areas (KBAs), and Convention on Migratory Species (CMS) work, we hope to accelerate the process of habitat protection for marine mammals and the ecosystems that support them. The networking of IMMAs could represent a cost-effective approach to conservation. They can help supply the basis for future MPAs, MPA networks, marine spatial planning and support marine biodiversity conservation in general through marine mammal flagship, umbrella and indicator properties.

In order to identify and propose IMMAs, a set of criteria must be developed that are simple and flexible to allow use in different countries and geographic areas. Criteria must be science-based and applicable to all main marine mammal taxa, and be able to account for the major ecological and biological differences that exist among marine mammals. To achieve this goal, the MMPATF organised on 22 October 2013 in Marseille a workshop dedicated to the selection of IMMA criteria, with the participation of specialists familiar with the main marine mammal taxa, as well as those working in the CBD EBSA and IUCN KBA arenas, and those who have worked on devising the original criteria descriptions for these approaches. This workshopfunded by the Animal Welfare Institute and The Pacific Life Foundation, with the help of The Ocean Foundation and Whale and Dolphin Conservation confirmed the importance of establishing IMMAs specifically and KBAs generally as lists of potential sites for the designation of EBSAs in the marine environment as endorsed by the Parties to the Convention on Biological Diversity. A working group, set up from this workshop, will now work to finalize the criteria and determine next steps for its testing and implementation.