Giuseppe Notarbartolo di Sciara has attracted our attention to recent events concerning the Mediterranean subpopulation of sperm whales, which has been red-listed as Endangered since 2006 based on an inferred continuing decline of an already reduced population (assumed to be in the low to mid hundreds). In the past, the main cause of mortality in the Mediterranean was bycatch in pelagic driftnets, which have now been banned from the region since 2001. Driftnets continue to be deployed illegally by several Mediterranean fleets, but fishing intensity has significantly decreased because of the ban and there were hopes that the sperm whale population would be recovering. 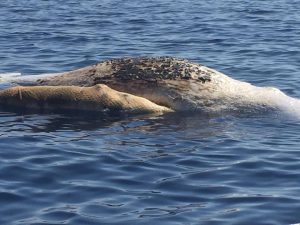 Unfortunately, mortality in driftnets still occurs as shown by recent reports of multiple entanglements – a social unit of 8 whales in Algeria in May 2019 and a mother-calf pair in Italy in June 2019. Also, an unusual mortality phenomenon affecting sperm whales in Italy is being investigated by Sandro Mazzariol and colleagues. Fourteen animals were found dead over a 6-month period (24/12/2018 – 01/07/2019) between Sicily and Tuscany, with a cluster near Sicily in May. Two more were reported as stranded along the French Mediterranean coast in November 2018 and one more carcass (presumed to be a sperm whale) was found floating off Liguria in July 2019. All the carcasses were in an advanced state of decomposition, most of them calves or juveniles with stomachs empty or containing plastic debris (which was not the cause of death).

Finally, Greece is issuing extensive concessions for seismic surveys for oil & gas prospecting along the Hellenic Trench, an area that hosts the largest concentration of sperm whales in the Eastern Mediterranean (about 60 individuals) and which is designated as an Important Marine Mammal Area (IMMA). The prospect of prolonged ensonification of this important sperm whale habitat is of great concern.